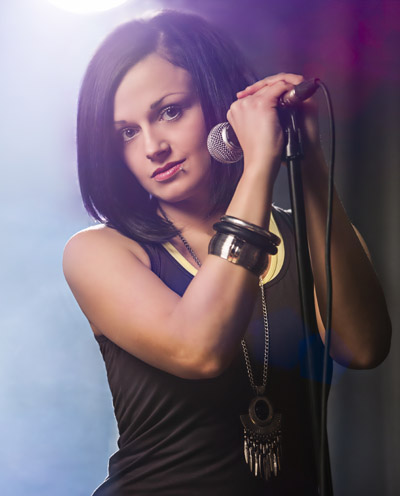 "THE NEXT BIG THING" 2014 WINNER: AMY NELSON
The Finals show of Big Dog 92-7/Bell Media's "The Next Big Thing" country talent competition was held last night at Eldorado Country Rock Bar in Regina, with Amy Nelson (Regina), Blake Berglund (Kennedy), and Tenille Arts(Weyburn) each performing in the hopes of convincing an esteemed panel of judges that they should be selected as this year's winner. Following impressive performances by the three artists, Amy Nelson was declared the winner.

We are pleased to announce the Top 3 Finalists in the running for this year’s Next Big Thing competition. Congratulations to Amy Nelson, Blake Berglund, and Tenille Arts, who will be performing live on Thursday, June 26 for the general public and a panel of national music industry jurists.

In what is sure to be a very close competition, the most outstanding artist of the night will receive a grand prize package valued at over $15,000, along with the title of “Next Big Thing 2014.” The winner will secure a mainstage performance spot at the 2014 Craven Country Jamboree and additional opportunities. This year’s champion will join the impressive ranks of previous winners: WYATT (2009), Chris Henderson (2010), Jess Moskaluke (2011), Myshel Pajuaar and The Midnight Roses (2012), and Alex Runions (2013).

Amy Nelson (Regina), www.amynelson.ca: Confident country-rock songstress, Amy Nelson is a force to be reckoned with and is often referred to as one of the hardest working independent artists in the Canadian country music scene. She released her debut album in 2008 and has been nominated for 18 SCMA awards, opened for many Canadian stars (George Canyon, Terri Clark, Aaron Pritchett, etc.) and performed at notable events including the Craven Country Jamboree, Calgary Stampede and many more. Amy’s sophomore album (due for a June 20, 2014 release) was produced by award-winning Saskatchewan producer Bart McKay. Her summer is busy with numerous upcoming performances, and in September she will be heading out on a radio tour of western Canada to promote her upcoming single.

Blake Berglund (Kennedy), www.blakeberglund.com: Raised in the Moose Mountains deep in Saskatchewan's south east corner, Blake Berglund took his early childhood responsibilities of tending to 200 head of horses as the education needed to base the musician's career around hard work. These efforts have earned him slots supporting the likes of Corb Lund, Jim Cuddy, Jason McCoy, The Sheepdogs, among many others around his consistent 100+ date yearly national tour schedule. Berglund has showcased at the 2012 Breakout West Festival and Canadian Country Music Awards, in 2013 at Canadian Music Week and JunoFest and in 2014 at Folk Alliance International in Kansas City, MO. He won SCMA’s 2013 Saskatchewan Roots Artist of the Year with his fresh style of country music.

Tenille Arts (Weyburn), www.tenillearts.com: Tenille grew up singing in Weyburn and is now poised to make her mark. At 20, she has won countless regional vocal competitions and performed at Craven Country Jamboree, Casino Regina and Telemiracle. She was a finalist on the Idol-style talent show, Karaoke Star Junior (CMT/YTV/Corus Entertainment) and represented Saskatchewan in Canada's National Talent Competition in 2009 in PEI. A discovery of her music on YouTube has led to a team of industry elite forming around her, and she is now writing songs for her first album, due for release this year.

This year’s finalists were determined by a panel of music industry professionals.

Everyone welcome, come cheer on these talented artists! Admission $10 at the door with a portion going to the Big Dog 92.7 Kid’s Fund.

Ten emerging country artists have been selected as semi-finalists in the 2014 version of The Next Big Thing, competing for a chance to take their careers to the next level and win a custom-tailored prize package valued at more than $15,000 – consisting of $10,000 cash PLUS options of their choosing, such as a professional single released to national radio, showcasing for music industry professionals, hands-on career guidance, and more.

Following a call for submissions that went out across Saskatchewan, artists submitted two original music tracks plus biographical and other information for consideration in the competition. From this year’s talented pool of artists, a panel of music industry professionals has determined that this year’s Top 10 artists are as follows.

The Top 3 finalists, to be announced on June 10, will perform in a showdown of their original music live for the public and a panel of music industry professionals in the Finals show on Thursday, June 26. An esteemed panel of Canadian music industry professionals is being brought in to adjudicate their performances and select the winner of this year’s Next Big Thing, to be announced that same evening.

THE NEXT BIG THING
COUNTRY TALENT SEARCH FOR 2014 OPENS

Big Dog 92-7 is looking for country music artists who believe they could be The Next Big Thing to come from Saskatchewan. The winner of The Next Big Thing 2014 will be awarded cash, mentorship and career-building options, with a prize package valued at over $15,000!

Artists from solo to full bands in country and related genres (such as bluegrass and roots) are invited to submit an entry. A panel of music industry professionals will select the Top 10, who will be unveiled to the public at the beginning of June. From there, the Top 3 Finalists will be selected, and will perform in a live showdown on June 26 to determine who will be chosen as The Next Big Thing.

“We have amazingly talented country artists in this province, and we are looking forward to hearing from both established and emerging artists once again for this year’s competition. We are thrilled that our previous winners are enjoying continued momentum in their careers,” states project producer Lorena Kelly of SaskMusic. In addition to the useful $15,000 prize, the Next Big Thing will have additional opportunities – with recent years’ winners also receiving performances at Canadian Country Music Week, Queen City Ex, and Craven Country Jamboree mainstage. “It’s a great promotional tool, and a boost to an artist’s overall career,” Kelly continues. Previous Next Big Thing winners are Saskatoon’s WYATT (2009), Regina’s Chris Henderson (2010), Langenburg’s Jess Moskaluke (2011), Swift Current’s Myshel Pajuaar and The Midnight Roses (2012), and Regina’s Alex Runions (2013).

To make an entry, artists will provide two original songs in audio or video format, a photo, biography and other information to be evaluated by a panel of music industry professionals. See contest Rules and Regulations for full details, below.

Submissions will be received until May 2, 2014:

1) Review the Rules and Regulations (PDF)
2) Fill in the online entry form including all requested information, before midnight on May 2.

If you are selected as one of the 10 semi-finalists, you'll be notified by the end of May.

The Finals show, where the Top 3 Finalists will be performing live, is scheduled for Thursday, June 26 in Regina.