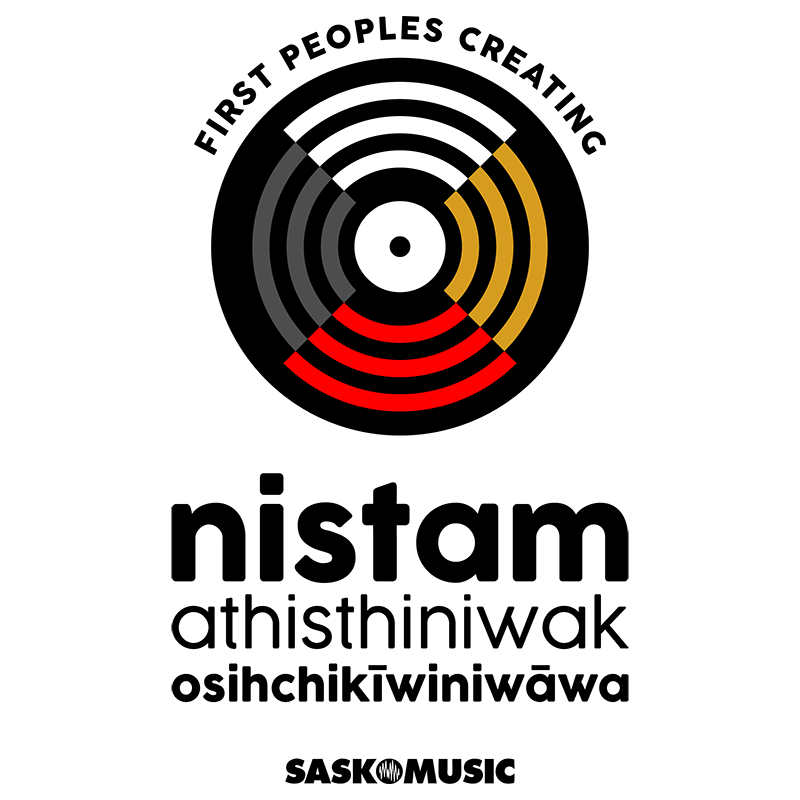 Stay tuned here and on our social media for the playlists as they are unveiled throughout June.

Thank you to CBC Saskatchewan - Afternoon Edition which will also be showcasing these curators and artists each Friday in June between 4-6pm. 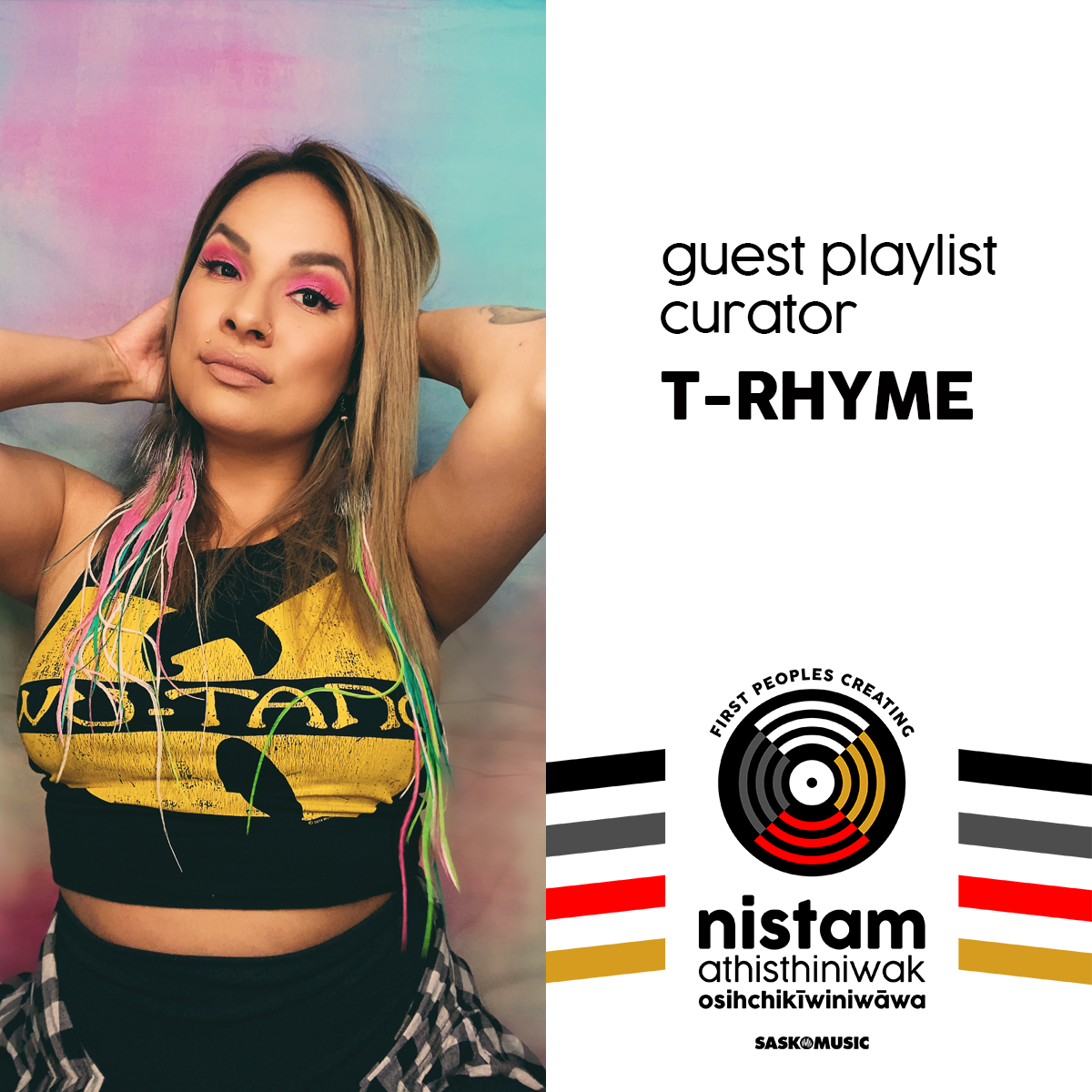 Our fourth guest playlist has been curated by Tara "T-Rhyme" Campbell.

She explains, “When I was a little girl I used to dream of being a DJ on the radio or in a dance club someday. I didn't know of any Indigenous women who were DJs back then. But now I guess this is my time to shine! Now if they could just bring back Electric Circus so I could go dance in a window to Sugar Cane, downtown Toronto with all my Natives.” Inspired by the spirit and sound of Golden Era Hip Hop, Tara "T-Rhyme" Campbell shines a spotlight on her life experiences through poetry, lyricism and music.

Revitalizing pride in her Dene (Dënesųłiné) & Cree/Metis roots has served as inspiration and motivation for T-Rhyme to become an artist other women and Indigenous youth can relate to. Alongside being a mother, activist and musician, she is also the artistic force behind her beaded jewelry line aptly named Beads, Rhymes & Life. T-Rhyme believes in using her voice to project truth and authenticity while keepin’ it clever, gritty and real. 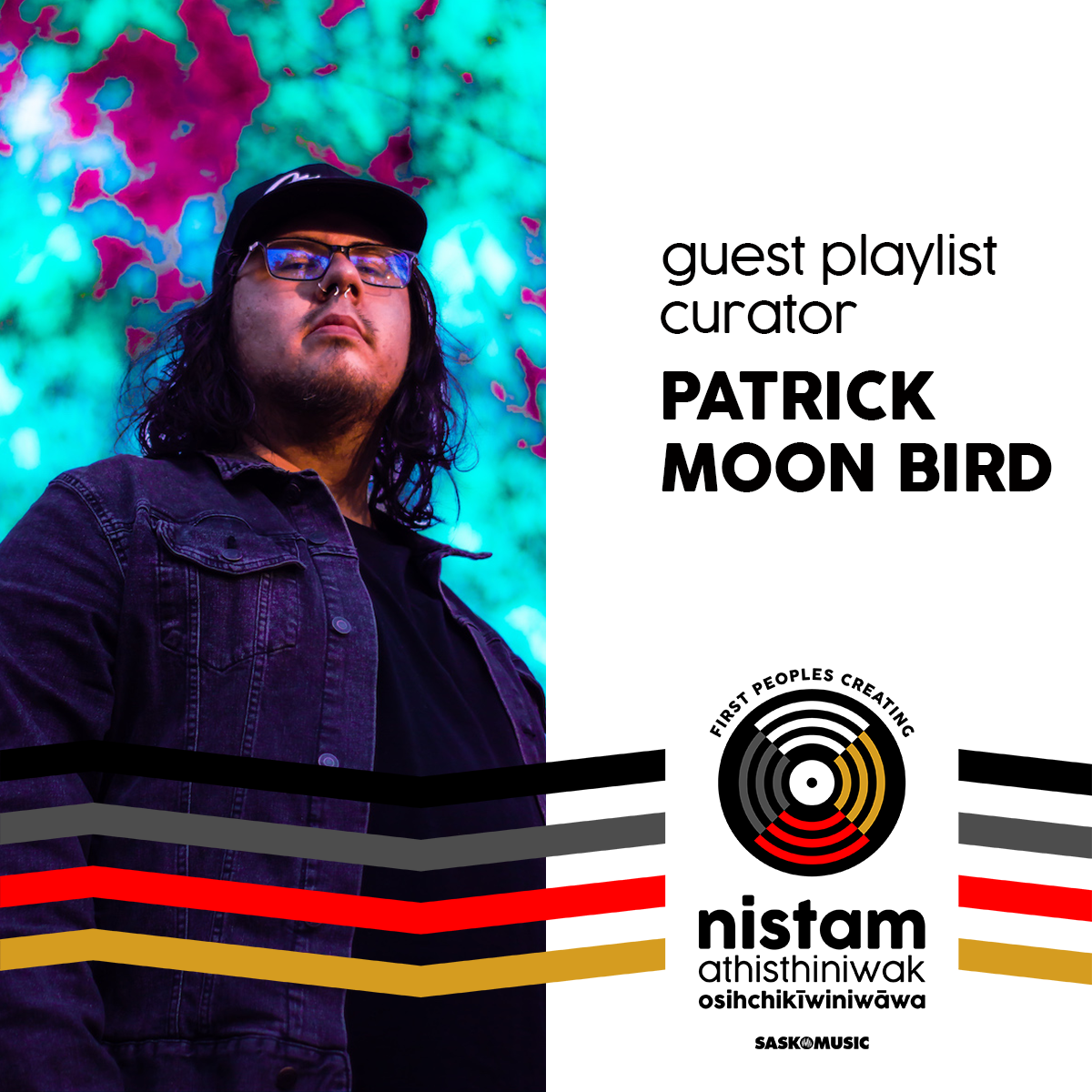 Our third guest playlist has been curated by Patrick Moon Bird.

Patrick explains, “This playlist is made up of artists that I look up to. Every artist on this playlist is an Indigenous artist that has overcome the struggles and found their voice through music.”

Patrick Moon Bird is a self-taught Indigenous multi-instrumentalist from Prince Albert. He has played a lot of genres over the 19 years that he's been making music, but has been excelling in lo-fi hip hop. Overall as of right now, he has gained over 1M streams on Spotify and Apple Music combined. Patrick Moon Bird has also been featured on MBC Radio, CBC Radio, Exclaim! and the North Sask Music Zine. 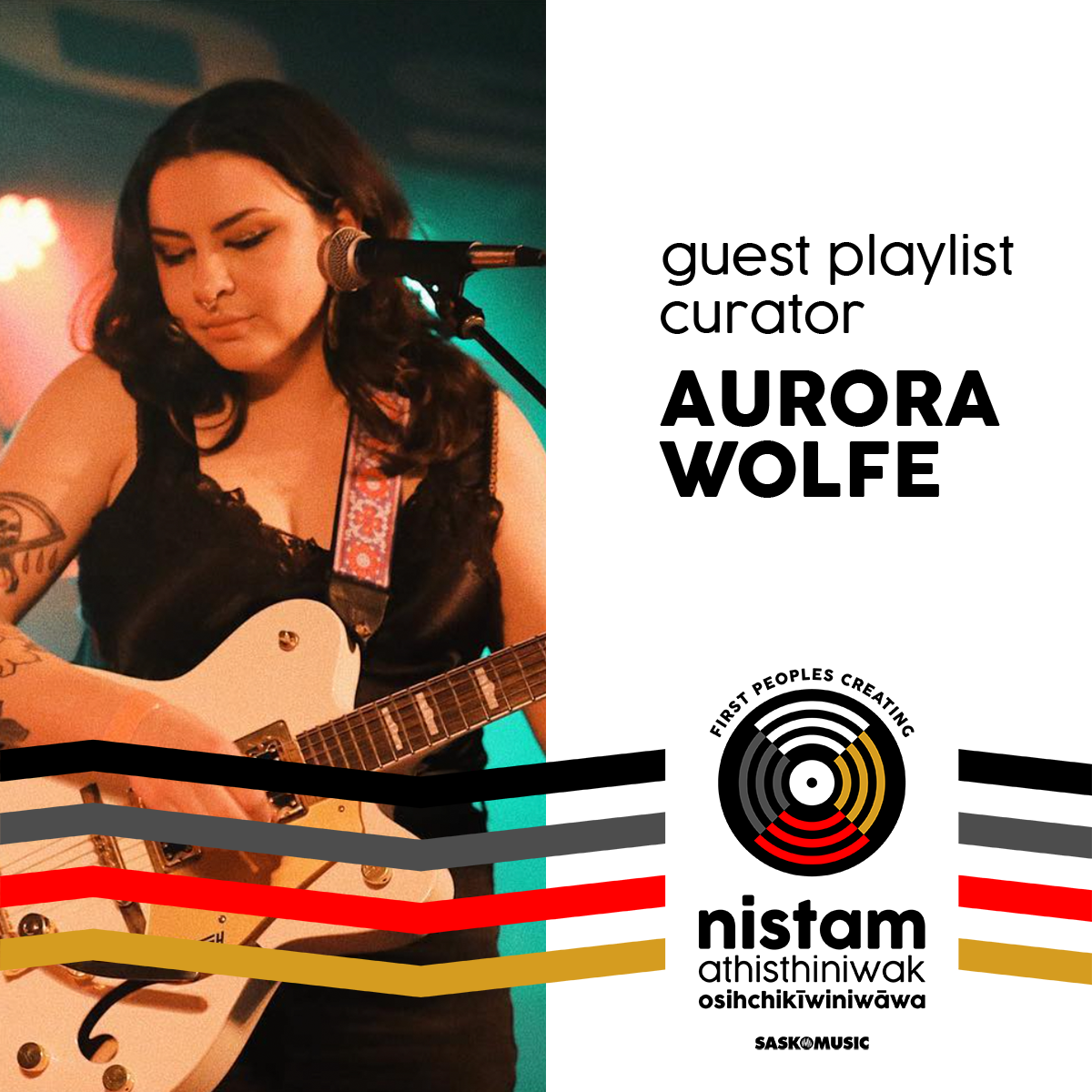 Our second guest playlist has been curated by Aurora Wolfe.

Aurora describes, "This playlist celebrates the endless expressions of Indigeneity that exist throughout the prairies. From traditional drumming, to gospel, to ambient, to hip-hop- it features artists from countless genres and backgrounds. Showcasing a wide variety of Indigenous goodness, think of this playlist as a tasting tray of tunes with something for everyone!"

Aurora Wolfe is a mixed-blood, (Cree and Scottish) multimedia artist and musician based in Saskatoon. She leads the trash-pop group Dump Babes who recently released their first full-length studio album and will be spending the summer performing at Sled Island, Ness Creek Music Festival, and Regina Folk Fest. Additionally, she works within visual arts and academic realms - bringing together archival/ historic references into digital mediums. 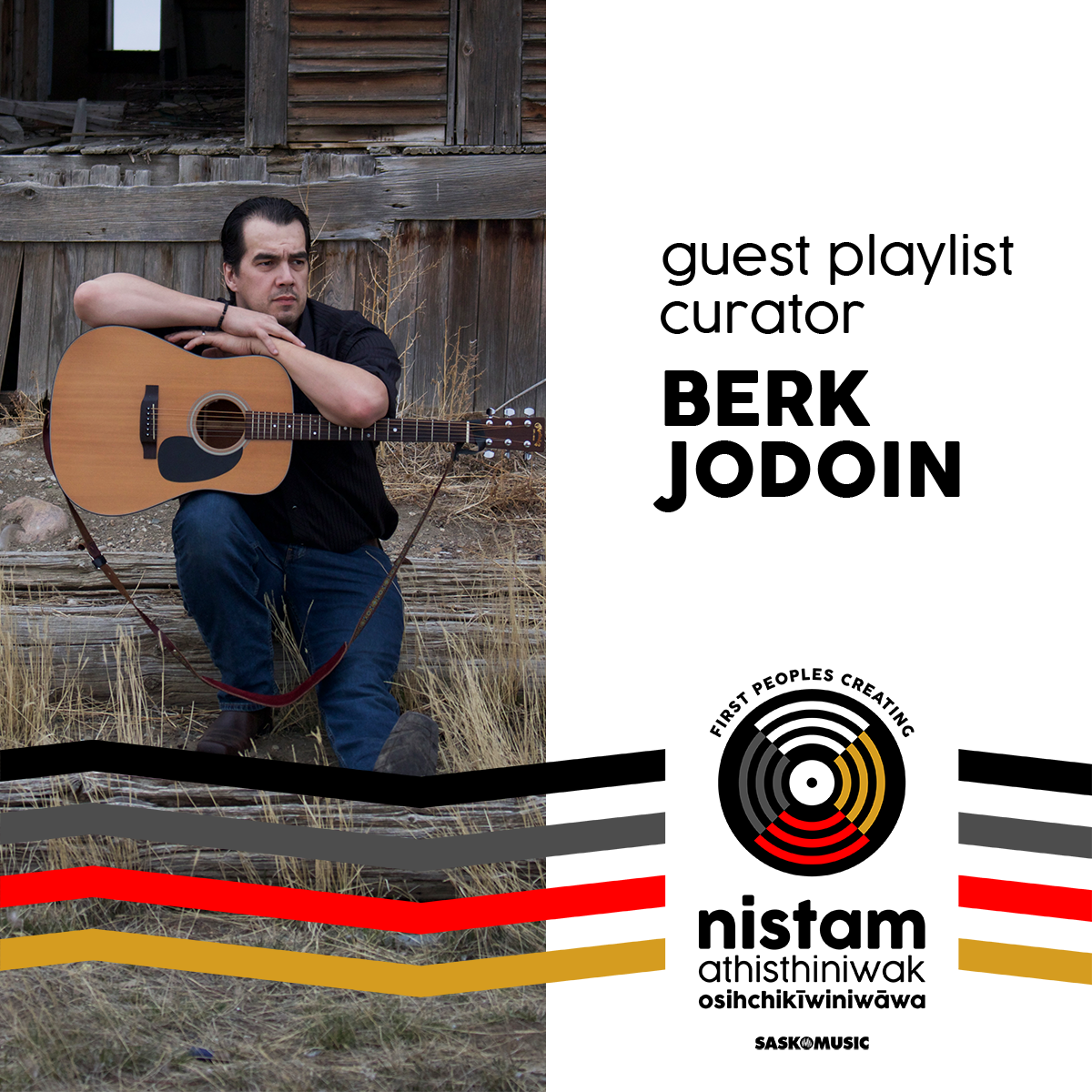 Our first playlist was curated by Berk Jodoin. Berk describes his playlist as, "Indigenous Artists displaying our wide range of talents from all corners of the great province of Saskatchewan."

Berk Jodoin is an Indigenous singer/songwriter from the small Northern community of Pierceland, Saskatchewan. A town much like all the other picturesque towns throughout Canada, this community started the incubation that would become the backbone of Berk’s stylistic writing.

Berk broke into the recording artist scene with his self-titled debut release in December of 2020. The first single “Sisters” was met with critical acclaim, reaching the top ten of the Indigenous Music Countdown and securing Berk with the SCMA’s Indigenous Artist Bursary award.

Fresh on the heels of his debut full-length album release, Berk began to record his sophomore effort. Coining this new record “Half Breed”, Berk chose the title partly based on his own ethnic background, but also because of the way he writes and records. Berk tends to colour outside the lines and not follow the “industry recipe” for writing songs. This soon-to-be-released album boasts one of Berk’s favourite songs he’s ever written, called “Cowboys & Indians” it’s Berk's view on the many divisions in the world right now. And how we need to turn a corner to make the world a better place for everyone.

Now residing in Leader, Saskatchewan with his wife Jenny and his three children, Berk tells his stories through song. These stories are often based on topics that most people would choose to ignore, but Berk’s carefully crafted songs will captivate the listener emotionally.  He fuses his influences like Steve Earle and Waylon Jennings together to create soulful storytelling with just the right amount of gravel.

We are grateful to Knowledge-Keeper and educator Eleanor Hegland from Lac La Ronge for suggesting words from the Cree language with which to describe our artistic focus this month. nistam athisthiniwak osihchikīwiniwāwa (First Peoples Creating) will showcase creators from many styles of music.

We recognize there are many distinct and beautiful Indigenous languages spoken in Canada, many of which are endangered. "The Cree language has the largest speaker population of all of Canada’s First Nations languages with an estimated 75,000 speakers, including dialect groups ranging from Quebec to northeastern British Columbia and into the Northwest Territories. Approximately 20,000 of these speakers live in Saskatchewan, where Cree ranks second only to English as the most commonly spoken language of the home - Cree bands making up over half of the province’s seventy-four First Nations." - Indigenous Saskatchewan Encyclopedia

Our National Indigenous History Month programming is made possible in part through the financial support of FACTOR Canada (the Foundation Assisting Canadian Talent on Recordings), the Government of Canada, and Canada's private radio broadcasters.