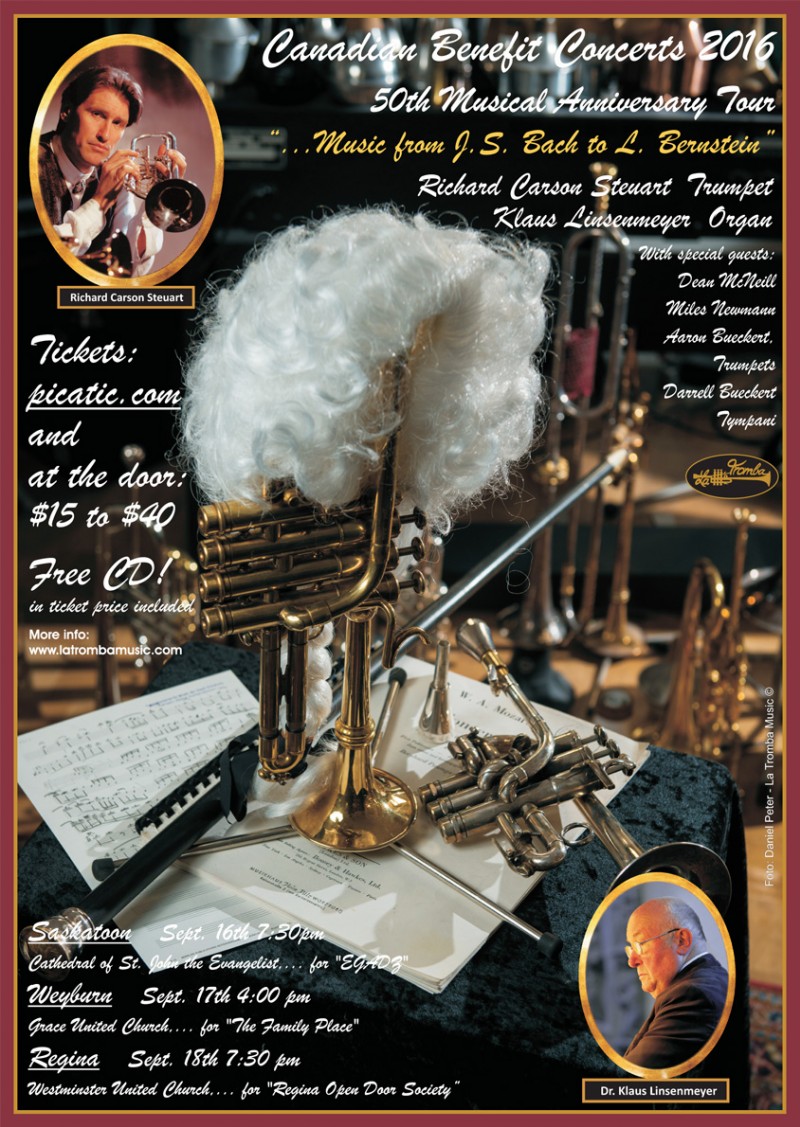 Richard Carson Steuart is an internationally renowned and acclaimed Canadian Music Composer, Producer, Trumpet Soloist, and University Lecturer born and raised in Saskatchewan. He is the winner of the world’s most prestigious National and International Classical Solo Trumpet competitions and, based in Europe since 1978, has been touring and lecturing for over four decades world-wide. Parallel to performing these three concerts with Dr. Linsenmeyer, he will be giving free Master-Classes at the two Saskatchewan Universities as the guest of Professor Miles Newmann, at the University of Regina, and Professor Dean McNeill at the University of Saskatoon.

His three Concerts, together with the Concert Organist Dr. Klaus Linsenmeyer of Germany, will include music from “Bach to Bernstein”, and will take place in:

Tickets will be available at Picatic.com online, and at the door (starting an hour before the concert times above), and will cost between $15 and $40, with each ticket-holder receiving a CD compilation of Mr. Steuart’s recorded works covering a wide variety of genres… a “50th Musical Anniversary Tour - Benefit Concert CD”.

Born on January 31st, 1956 in Weyburn, Richard moved with his family to Regina in 1960. His first musical instruction began on his 9th birthday under the tutelage of his father, Kenneth Leslie Steuart, a SaskTel Telecommunications Engineer and a serious brass-playing hobby musician. Richard performed his first public concert as Cornet Soloist in Rosemont United Church in Regina in 1966 together with Ms. Edith Chisholm, after only one year of any kind of musical studies. At age 11, Richard undertook his first “Jazz” tour as featured “junior” Trumpet Soloist. This was as a part of the 1967 Canadian National Centenary Concert Festivities. He was accompanied by a professional Big Band led by his first professional teacher, Dr. John Harding. Richard was a repeated Class A-Open First Prize winner in the Regina and Saskatchewan music festivals, and was, as well, the Junior First Prize winner (at age 11) of the Canadian National Music Festival in 1967.

Richard became a member of the Regina Symphony Orchestra in 1969 at age 13, advancing to the Solo Trumpet position in the 1971/72 season. In 1970, at the age of 14, he accepted his first Trumpet Teaching- Assistantship under Dr. Mel Carey at the University of Saskatchewan, Regina Campus. Having previously studied Saxophone, Clarinet, Oboe and Piano at the Regina Conservatory, he found time to teach beginner Clarinet and Saxophone for the Regina City School District.

From 1970 to 1975, he was Solo Trumpeter of the National Youth Chamber and Symphony Orchestras of Canada performing on extended Summer Concert tours in among other major Canadian cities, Vancouver, Toronto and Montreal. He was also a featured Soloist with that orchestra. In 1976, at age 20 and already CBC Radio Soloist and Solo-trumpeter of the Canadian Chamber Orchestra, he won both the First Prize at the Canadian National Music Festival in Toronto and the Canadian Broadcasting Corporation's Radio and Television Classical Solo-Instrumental Competition - the “CBC Talent Festival”, for all Wind Instruments. Immediately thereafter he was accepted into the famous Curtis Institute of Music in Philadelphia, USA. There he received a full 4 year Scholarship and was awarded the first of three consecutive international Study Grants (1976-1978) from the Arts Council of Canada, with which he subsequently studied in Chicago and New York with the foremost members of the Symphony and Opera Orchestras of those major American cultural centres. Travelling to Europe in the summer of 1978 as Solo Trumpet of the World Youth Orchestra, he completed his studies in London and then Munich, and, in November, accepted the Solo Trumpeter position in the German Opera in Düsseldorf. In February of 1979 he took the position as Solo Trumpeter of the world touring, “Bamberg Symphoniker”. As co-founder of the

German Brass Ensemble (1979), he competed for and won both the German- ARD (1980) and Swiss- SRT (1981) International Radio and Television Competitions for the Trumpet as Solo Instrument. His musical accomplishments were officially honoured by the Bavarian State Ministry of Culture when they created a special position for him in 1983 at the Music Conservatory / State University of Music in Wuerzburg, Northern Bavaria where he continues to teach both Historical and Modern Trumpet and Chamber Music today.

Performing thousands of live concerts, producing over 20 Solo and Ensemble CDs from Classical to Jazz for his own CD “La Tromba Music Productions” company, as well as recording with various top musical constellations as both an Opera and Symphonic Solo-Trumpeter, Solo Concert Soloist, Chamber Ensemble and “Soloist-Leader”, Mr. Steuart’s Classical Music experience is truly extensive. As featured Recording-Artist for the CBC, WDR, BR, SDR, ARD, SRT Radio and Television stations, as well as for the RCA, BMG, EMI, MMO and Konstantin and Koch-International CD and Film production companies, and through touring with groups ranging from English and German Pop and Rock to Brass and Symphonic Concert Bands, diverse Jazz and Modern-Fusion Orchestras as well as international Historical Music Ensembles, and for major European and Hollywood Films, his musical knowledge and understanding has developed quite naturally in a very broad spectrum.

Richard Carson Steuart’s teaching activities as guest professor in major conservatories and universities, as well as his Concert touring in Germany, Russia, United States, Canada, China, Japan and throughout Europe, has contributed to the high regard he enjoys from the general public and his peers alike. He is not only one of the foremost Trumpeters of his generation, but also one of the world's most experienced, versatile and knowledgeable trumpet performers and teachers today.

The German Concert Organist Klaus Linsenmeyer has been the General Music Director of the "Hauger-Stifts-Kirche" in Wuerzburg since 1971. He studied organ from 1959 to1963 with the famous Johann Sebastian Bach specialist Prof. Karl Richter at the Musikhochschule (University of Music) in Munich, during which time he was engaged as organist at both the Zwölf-Apostelkirche and the Bürgersaalkirche in Munich. For more than 40 years, he was Director of Musical Studies at the Friedrich-Koenig-Gymnasium in Wuerzburg, at which time he was also engaged as organ teacher at both the Hermann-Zilcher-Konservatorium and the Musikhochschule (University of Music) in Wuerzburg. Over the past 60 years of his musical career Klaus Linsenmeyer has performed as Soloist in over 100 Radio recordings and CD productions for, among others, the Bavarian State Radio in Munich, and toured Canada (Vancouver, Victoria), USA, Brazil, Portugal, Israel, Spain, Czech Republic, Poland, Italy, Austria, Switzerland, Egypt, Lithuania, Korea, as well as many of the largest cities of Russia, including Volgograd, St. Petersburg and Moscow.

In 1996 he was awarded his Doctorate of Musical Philosophy from the Julius Echter University in Würzburg, successfully defending his dissertation concerning the iconic German pianist, composer and teacher Wilhelm Kempff. In November 2015 Dr. Linsenmeyer was awarded the Bundesverdienstkreuz am Bande (German National Medal of Honour) from the German President personally, paying due tribute and respect for Dr. Linsenmeyer’s life work as both a teacher and musical artist in the German Republic.

To hear a wide variety of samples of Richard Steuart performing on trumpet check out: http://www.latrombamusic.com/cms/15.html