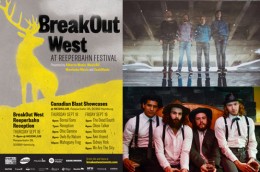 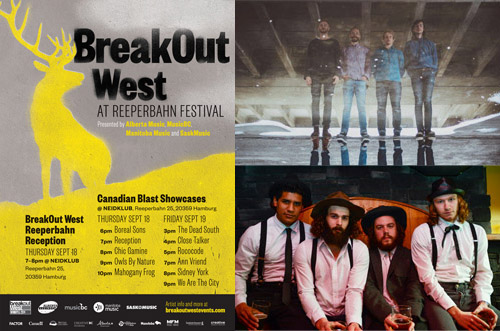 SaskMusic will be attending the upcoming Reeperbahn Festival under the BreakOut West brand, where in partnership with Alberta Music, Music BC and Manitoba Music, we will present receptions, networking events, and participate in Canadian Blast showcases. This is SaskMusic’s third annual export mission to Reeperbahn.

Saskatchewan artists Close Talker and The Dead South were hand-picked by Reeperbahn organizers and will perform as part of the Canadian Blast – Canada House lineup. SaskMusic Executive Director Derek Bachman will support our two artists at the event and attend business-to-business meetings on behalf of the Saskatchewan music market.

Our events will begin in Berlin on Tuesday, September 16 with a Pre-Reeperbahn event consisting of one-on-one “matchmaking sessions” with a focus on German music publishers, sync supervisors, and German live promoters and agents. SaskMusic and representatives for each of the showcasing artists will be in attendance for these sessions. This event is presented in partnership with the Canadian Independent Music Association (CIMA).

The BreakOut West group of industry associations will also host a networking luncheon on Wednesday, September 17 in Berlin, with key individuals from the Berlin live music industry. We will then depart for Hamburg, where the group will present the BreakOut West Reeperbahn Reception on Thursday, September 18 at Canada House (held at Neidklub) in Hamburg, followed by two days of showcases with Western Canadian acts. The Dead South and Close Talker will showcase on Friday, September 19 at Canada House as part of the Canadian Blast showcases.

For more information on our participation at Reeperbahn, please visit www.breakoutwestevents.com or contact Derek Bachman, 306-975-0866 or derek@saskmusic.org.

We thank Creative Saskatchewan for their support of this initiative.

SaskMusic is a non-profit association that stimulates growth and development in the commercial music industry of Saskatchewan through leadership, promotion, training, advocacy and partnership. We offer programming including career consultations, workshops, marketing, artist listings, export assistance, networking opportunities and much more. We represent the four components of our industry: creative, interpretive, technical and administrative. Our artists and music professionals hail from across our province, and work in pretty much every genre you can imagine. We are a source of information and resources for both the public, and the music industry.

About The Dead South (www.thedeadsouth.com):

Close Talker, the exalted, young, indie-rock quartet from Saskatoon Saskatchewan recently announced their second full-length album, “Flux,” will be released on November 4 via Nevado Music. Recorded over three weeks during the spring of this year at Montreal’s Breakglass Studio with Jace Lasek (Land Of Talk, Suuns, Young Galaxy), while the Canadiens were in the throes of their playoff run. Their 2013 debut “Timbers” was widely raved about for its “edgy vocals, gentle piano lines and orchestral ambition.” The band went on to become finalists in the national CBC Searchlight competition for Canada’s Best New Artist. They subsequently received substantial airplay across the nation, including spins on CBC R2’s The Drive. Their single, “The West Was Won,” spent seven weeks in the Top 10 of CBC R3’s chart.

Canada is back again this year with a showcase and a number of business events at the Canada House. Over the course of two days, the Canadian Independent Music Association (CIMA) will introduce around 20 of the newest and hottest acts from Canada. B2B events will also provide Reeperbahn Festival delegates with an opportunity to network with representatives from the Canadian music industry. CIMA is a not-for-profit national trade association representing the English-language, Canadian-owned sector of the music industry. CIMA’s membership consists of Canadian-owned companies and representatives of Canadian-owned companies involved in every aspect of the music, sound recording and music-related industries. CIMA’s mandate is to develop and advocate policies and services that serve to support a strong and economically stable Canadian independent music and sound recording industry, ensuring the long-term development of the sector and to raise the profile of Canadian independent music both in Canada and around the world.

The Reeperbahn Festival is Germany’s largest club festival and is one of the three most important meeting places for the music and digital industries in Europe. Under the heading ‘Talents, Trends & Trade,’ the festival offers around 600 wide-ranging events in more than 70 venues on and around Hamburg’s Reeperbahn. Over 30,000 visits are expected to attend the ninth edition of the Reeperbahn Festival – and they can look forward to the most exciting newcomer bands and artists from around the world, an arts and literature programme, and a business platform and conference for companies and organisations. Germany is the world’s third-largest music market.