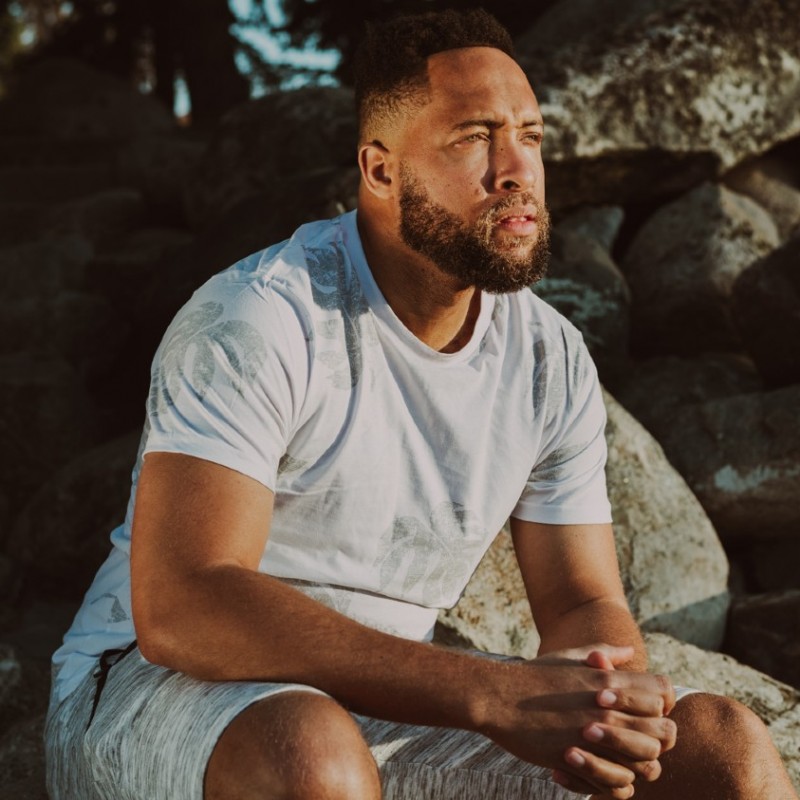 Teacher by day and genre explorer by night is what some may describe Jermain Mckenzie, who goes by the stage name of Germane. While much of his content revolves around creating a dialogue around current day political topics, Germane often does so with a tone that is both bright and uplifting. He is not afraid of pushing his limits as he self describes his creative process as "genre-bending"

When asked to describe his music, Germane touches on multiple aspects. He notes how his music is made with an intense focus on lyrics. He is a firm believer in the power that words hold and believes that music is one of the best avenues for speaking to the soul.

"A lot of my music is almost like social commentary, like if you listen to 'I Can't Breathe' which was the hip-hop song I did around the time of the murder of George Floyd and the protest movement that developed around that, the lyrics can be touching and very deep depending on how close you are to the subject matter."

"I write about a lot of serious topics, but I also like to have fun...I try to go on a wide spectrum and try to write music that speaks to the entire human experience"

"I thought about how in tuned my students were to music and how hard it was to get them away from music, even in class...the moment they have free time, they're always listening to music."

Germane's approach to music also emphasizes the accessibility to music that is available to his students, again providing an alternative to potential dangerous behavior.

"Another reason for me in trying to connect with students is to show them 'hey, anybody can do it. I'm your teacher and I don't have any serious training in music. Yes I grew up singing in church and choir and stuff like that, but I don't really have any serious theoretical music background. But here I am writing and expressing myself'."

As an independent artist, Germane has faced a fair amount of challenges. While Germane excels in writing, he notes how has has struggled with the technical aspect of music production such as mixing and mastering. Another element Germane considers is the marketing aspect of his music.

"You could have the best song in the world as an upcoming independent artist, but if you don't know how to promote it, the rest of the world will never hear it."

Germane hopes that any upcoming artists just starting out take that first step and encourages them try and experiment with new things. When asked about a specific message, Germane says:

Germane aims to release his first dancehall album in 2022 but hopes to soon display his versatility by releasing his backlog of country music shortly afterwards.

For more about Germane, visit

Our Making Art in Saskatchewan interview with Germane

Germane is an original "island boy" and hails from Jamaica. He made Saskatchewan his home just over 10 years ago. He attended the University of Regina and was actively involved in campus life, serving two terms as the President of the Students' Union. He also participated in numerous cultural events at the U of R.

Germane was always interested in music and performed in many concerts growing up, but he only started taking music seriously during the early months of the COVID-19 pandemic. He released his first song in the summer of 2020. The song "I Can't Breathe" was a powerful and reflective hip hop jam that explored the issue of police violence against Black people. The song was heavily influenced by the Black Lives Matter protest that took on global prominence following the killing of George Floyd. However, Germane has shown his versatility by pivoting into the dancehall genre, which he grew up on in Jamaica. His songs in that genre mostly focus on the issues of crime and violence, with the hope of encouraging young people to flee from crime and purpose education as a way to improve their socio-economic condition.

"I Can't Breathe" was written to express the pain and frustration that overflowed onto the streets of America following the killing of George Floyd. "The lyrics of the song dissects the ugly history of racism and police violence against Black people, which is similar to what slave hunters did during slavery," he notes. "The chorus of the song emphasizes that enough is enough and that the violence against Black people must stop and that it will be tolerated no more." You can listen to "I Can't Breathe" here.

"Resolution" is an appeal to end the moral corruption of today's youth by no longer making music that encourages young people to pursue a life of gangsterism and violence. The song sends a strong reminder to youths that only by pursuing education can they truly change their socio-economic condition and the issues of the larger society.