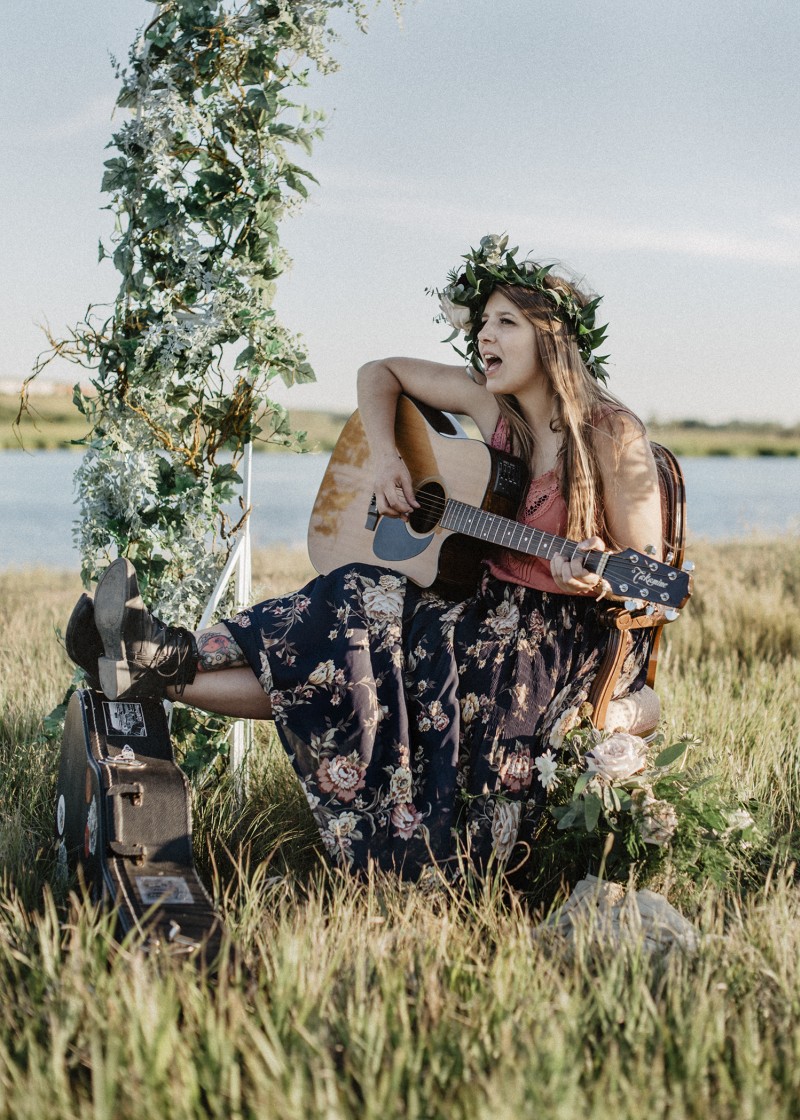 Vanessa Gauvin is an up-and-coming musician whose childhood and life experiences have had a major impact on the kind of artist she’s becoming today. Gauvin released her debut EP, “Devil Man,” on July 14. I had the pleasure of hearing some of Vanessa’s stories, musical influences and plans for the future.

“I was born in Walkerton ON and was still a baby when we moved to Swift Current, which is where I was raised. I moved when I was 18 and lived in several locations before my return to the prairies in 2015. Prior to leaving, I remember being obsessed with some of my mom’s music books, and loving the lyrics for Joni Mitchell’s ‘Clouds’ and Neil Young’s ‘Harvest’. I knew I wanted to write folk songs, and I sat there for so long trying to write something meaningful, but eventually concluded that I had no experience since I had not yet lived my life and I had no wisdom to share like Joni or Neil. It’s funny that I never tried to write again until I was 25, and had returned home with a large amount of adventures under my belt, and that’s the point my poetry and lyrics came out like a waterfall.”

In chatting with Vanessa, one thing that became very clear is that her childhood and family are a major influence on her art. She believes her many fond memories have helped shape her into the artist she is today. “I grew up in a home that encouraged creative expression. There were lots of instruments and art around. My mom (Helen Phillippi) would teach guitar lessons out of the house in the evenings, and we housed the jam space for my parent’s band. As my siblings and I grew older, we took over the jam space ourselves. It was always common that whenever mom and dad would have friends and family over, there would be people playing music. My mom grew up in Ontario where folks have ‘kitchen parties,’ where playing music is a necessity!”

Alongside an atmosphere of live music that surrounded Vanessa’s family, they had opportunities to dabble in formal training. “My siblings and I took piano lessons from a nun when we were young. Later, my brother and I took music lessons together from Al Hudec. We basically showed him rock songs we wanted to jam out to, and he’d show us what to play. He made us feel like we were in a band! We picked up any instrument we wanted; I learned about bass, piano and guitar. However, I was too shy to sing in front of him at that time. In fact, my mom put me in voice lessons when I was around eleven years old, but I dropped out after three classes because I was too shy to sing in front of my teacher!”

With the recent release of her EP and an assortment of impressive gigs, including an opening slot for Lindi Ortega in March 2018 at the Lyric Theatre, she must have found some way to get over her nerves. “Mom would often have jam sessions with her friend Jaqueline Hudec, and I would watch them. When I found time alone, I would pull out all the music books of songs they had practiced and teach myself to play my mom’s guitar and sing their songs. I have always found great comfort and solace in playing music for myself.

When the time came to perform at my first open mic, was I ever scared and shaky! I have grown so much since then and I’m much more comfortable, but I emphasize this because I’m hopeful that I can inspire others to show perseverance and overcome challenges. The music community in Swift Current is very supportive and encouraging for musicians; we are lucky to have so many great folks around here coming out to events and putting on shows and open mic nights. We’ve also got many venues that are open to facilitate live music.”

So what can we expect at a Vanessa Gauvin show? Well, she’ll likely be playing the acoustic Takamine guitar that her mother gifted her several years ago. She loves old guitars that carry memories and have had countless songs played through them. When she starts to play, her folk, rock, blues and soul influences are the ones that shine through the most.

“I’ve been a solo artist for the last few years. Previously I had been shy and timid on stage, but I’ve shown perseverance and grown to become comfortable and confident when performing. I get in my zone and pull the crowd in. I’m always shaking the audience to find empathy in the words I speak and the emotion in my voice. I play my own music, but I will often pull out covers of old songs that have influenced me (but) that aren’t well known. I’ve recently been picking up gigs at local retirement communities and encouraging the folks to share and discuss some of their favorite old tunes with me to learn. I’ve found this to be very rewarding. Music has been common ground for me to connect with my community, it really doesn’t matter what age you are.

I’ve played live with a band a few times - the most recent being my EP release show. It was wicked! I love my intimate solo performances, but having the band is a whole new experience that I’m itching to get more of. I enjoy having more power behind my vocals to capture the audience and bring them to a new level.”

As for the future, Vanessa notes, “In the next year I hope to graduate from school. I’m studying to be an LPN at the Great Plains College. I’m interested to see how my nursing career will influence my music. My compassion for others through nursing will inspire my songwriting, and my passion for music will be a holistic tool used to comfort and connect with patients in my nursing. I want to have a music video or live performance available online, to tour Western Canada and to apply for several festivals next summer!”

To keep up with Vanessa, follow her social accounts @vanessagauvinmusic, find her on FaceBook, and check out her debut EP ‘Devil Man,’ available on all platforms.