Having recognized her natural ability to sing and her keen ear for music early on, Angeline realized that pursuing a successful career in the arts was her passion. She wrote and recorded her first song at the age of 16, and through You Tube ended up with a large following.

With some years under her belt of honing her craft behind the scenes, Angeline has since sparked the interest of multiple award winning producers along with the highly-acclaimed singer/rapper/songwriter/producer, Rico Love, with whom she was invited to work on a project with called  "The Emerging Women of R&B"  It was written by Rico himself, and released April 2020, as well she is also in the process of another project with him.

Angelines music is unique and would be described as r&b, neo-soul along with her own twist, with names like Jhene Aiko / Mila J / Ciara being a few of her influences.

Angeline is currently working on new music and has a debut project in the works. Her soft and delicate tone, feminine allure and honest lyricism are attention-grabbing.

Her newest single release entitled "Talk Back" produced by Dj D Wiz is the perfect combination of grit and seduction that's repeat-worthy for any rnb, soul or pop fan.

Angeline is headed for stardom and with that, she will strive to make the world a better place. 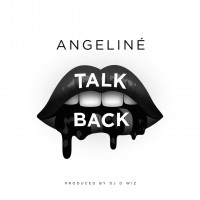