Dylan Hall was first introduced to the world of electronic music by a friend who made him check out “this really cool track” by EDM legend and fellow Canadian, Deadmau5. The track was cool, but the moment when Dylan became more than just a passive listener to “party music” was in the back of a pickup truck on a road trip to British Columbia.
“I listened and just thought, ‘I wonder how this stuff is made?’.”
When he got back home to Kenora, Ontario, Dylan used the modern miracle of Google to find the answer to that very question, and was introduced to EDM as a genre and a culture.
Dylan delved into the world of software, mixers, and studio time, and in 2012 released his debut album, which, like most first albums, went nowhere.
Undeterred and driven by his motto, “Failure Is Not An Option”, Dylan continued to improve his production skills and in September 2013 released his first official iTunes album, Break The Silence, under the name Lance The Pants. At the end of 2013, Dylan found himself connecting with other producers and EDM artists through his live DJ sets and online music communities. Amassing skills and upgrading his production software, in April 2014 he released the album This Is…
By now, Lance The Pants had a strong following at his live gigs throughout Northern Ontario and Manitoba, and worldwide on SoundCloud and other streaming services. In 2015, Dylan was selected by Pioneer to demo their new mixing hardware in selected Canadian markets. This culminated with the release of the album Black Gold in December of that year.
After a few unfortunate setbacks, Dylan was almost ready to move on from production, when he received what can only be called a sign from beyond, thanks to a failed eBay transaction. Dylan relocated in Thunder Bay and got back down to work. In his words, “I don’t take sh** seriously, ever. Until I do.” Returning to the studio and to his motto, Dylan relaunched himself as LTP and created his most adventurous and complex musical offering to date, Illusions, released in March 2017.
Dylan takes inspiration from “other people”, not just EDM artists, but artists in general – writers, painters, filmmakers – Dylan is driven to progress as an artist by immersing himself in creativity. This is reflected in LTP’s trademark sound, distinguishable in any tracks he produces on his own or in collaborations with fellow EDM artists.
At a time when oversaturation and popularity has watered down EDM for Top 40 appeal, LTP’s sound is depth, soul, and fresh relief; the new evolution of EDM. 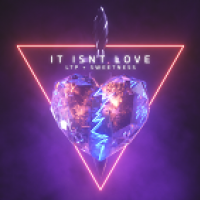 From It Isn't Love