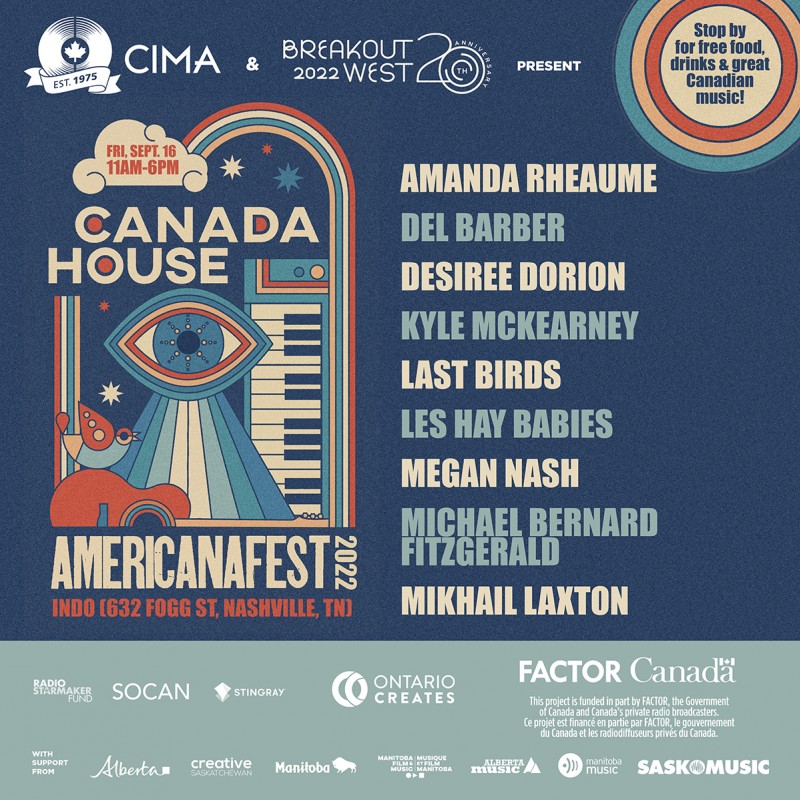 This September the Canadian Independent Music Association (CIMA), in partnership with BreakOut West, Alberta Music, Manitoba Music & SaskMusic, will be returning to Nashville for a business & showcasing mission at the 2022 edition of the AMERICANAFEST (September 13-17, 2022).

Join us for great music, food and drinks as we host a full afternoon of Canada House at InDo (632 Fogg St), Nashville on Friday, September 16 from 12-6 PM. The event is open to AmericanaFest conference attendees as well as the general public. Come out early to meet and network with the Canadians from 11AM-12PM and stay for the 9 exciting Canadian artists who will be performing throughout the afternoon.

Canadian companies representing the showcasing artists will also get the opportunity to participate in a morning of business events in partnership with Sounds Australia, British Underground and AMERICANAFEST. Canadian companies who will be in Nashville in September and who are interested in taking part in the business events can contact Jenia Schukov (jenia @ cimamusic.ca) for more information.

Sask's Megan Nash also has been selected by AmericanaFest organizers for an official showcase, as previously announced. The time of that performance is TBA.

All artist bios can be found on CIMA.

How were the Sask artists selected?
Following a call for artist submissions (conducted by CIMA), SaskMusic reserved one spot for Megan Nash (announced as an official showcase artist by AmericanaFest) and held an industry jury of the Sask submissions received to select the artist for an additional Canada House spot. AmericanaFest approval was required on additional Canada House artist selections as well.

Last Birds is the offspring of Canadian Folk Music Award-nominated artists Lindsay Arnold and Mike Davis (Hook & Nail). The couple’s time-travelling lyrics of ageing love and other hardships are delivered with close vocal harmonies layered over interwoven acoustic guitars. Their haunting sound hearkens back to the early days of country-folk music while keeping their boots firmly planted in the modern day.

Megan Nash (she/they) lives on Treaty 4 Territory. They’ve won and been nominated for numerous awards, including a 2019 JUNO Award nomination for Contemporary Roots Album of the Year for Seeker and a 2021 Best of Moose Jaw Award for Best Musical Artist. The recognition back home is in no small part due to her long and winding history of hitting the road, where she’s done international showcases in the United States, the UK, Germany, and Estonia on top of countless gigs in Canada’s small towns and sprawling metropolises. With everyone’s health top of mind on the touring schedule to come, rest assured you’ll be able to see them - and hear Soft Focus Futures live - the minute she’s able to safely hit your town.

For more information on AMERICANAFEST: www.americanamusic.org

About AMERICANAFEST:
The 22nd annual AMERICANAFEST will take place September 13-17, 2022 in Nashville TN, once again bringing together music industry professionals and fans alike for five days of discovery, insight and connections. AMERICANAFEST showcases hundreds of artists and bands throughout many notable venues in Nashville, TN. The destination event also features a first-rate industry conference, bringing together the top tier of the music business to discuss current industry topics and issues. Musical festivities are kicked off by the critically acclaimed Americana Honors & Awards, which celebrates luminaries and welcomes the next generation of trailblazers while offering one-of-a-kind performance pairings at Nashville's famed Ryman Auditorium.

Further cementing its status as “the coolest music scene today” by The New York Times, the five-day festival and conference event will bring together award-winning legends, trailblazing mainstays and buzz-worthy new artists for its 22nd year. With more than 150 artists and bands participating, Music City’s discovery music festival continues to be, as described by MOJO Magazine, the "roots alternative to the GRAMMYs® and South by Southwest." 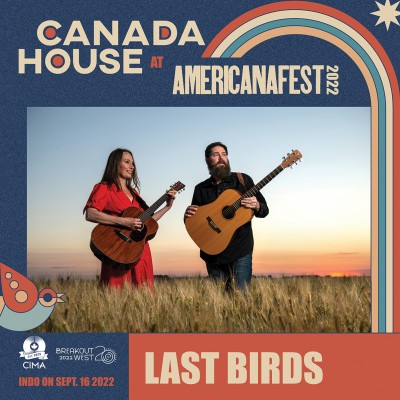 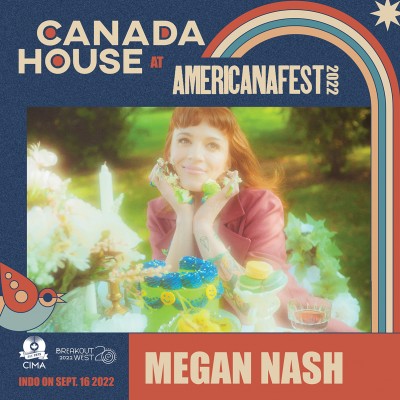