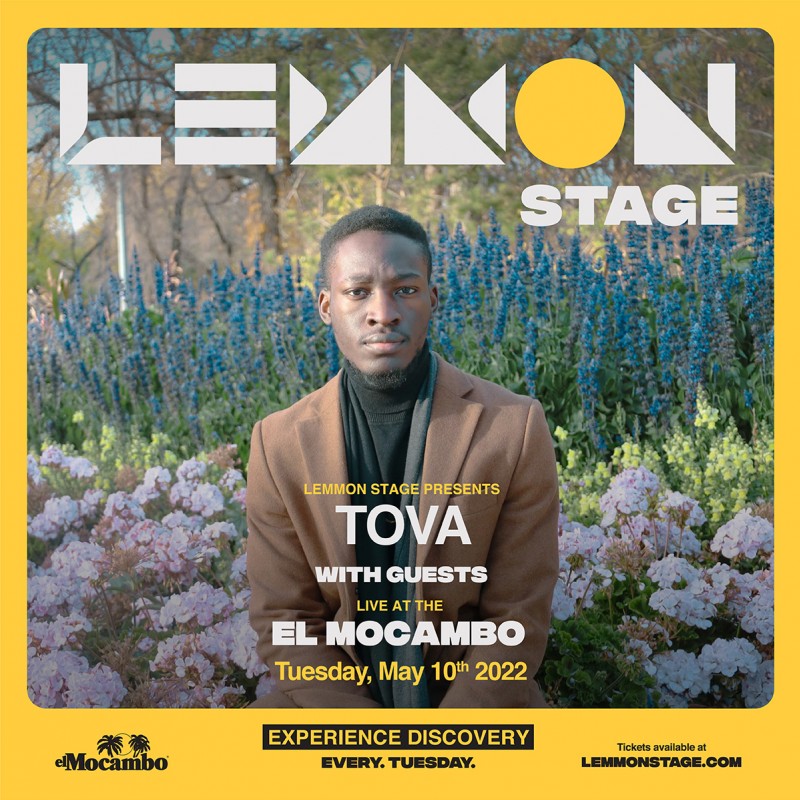 TOVA at the El Mocambo during Juno Week

Lemmon Stage x El Mocambo present a special show to be held during JUNO Week that will include Regina/Toronto-based TOVA, May 10 at the iconic Toronto venue.

JUNO events began April 29 and lead up to the May 15 JUNO Awards broadcast.

Learn more and catch the livestream at https://lemmonstage.com/events/

It’s been 10 years since the Lemmon Stage launched the careers of some of Canada’s favourite artists, Sumo Cyco, the Beaches, Courage My Love, Seaway, and many more at the Vans Warped Tour. The Lemmon Stage returned in 2021 to bring fans the best of emerging music all year round. Housed inside Toronto’s legendary El Mocambo, their Tuesday weekly events feature music from the best in new talent, plus some special guests along the way.

TOVA is a Nigerian-born Canadian R&B singer, and one of the most exciting emerging acts to
emerge from Regina. He layers smooth vocals and atmospheric sounds over
thoughtfully-crafted production. TOVA’s writing is characterized by compelling story-writing,
creative wordplay, and personal themes. He published his debut single Fleeting on May 15,
2020, to much acclaim. Since then, TOVA has gone on to headline the Regina Folk Fest in
2021, and he received a nomination for Saskatchewan R&B Artist of the year in the same
year. His sophomore project, For The Girls, was published April 2022 and has received critical
acclaim.

"First opened in 1948, the iconic El Mo has hosted the likes of Jimi Hendrix, Blondie, Ramones, Meatloaf, Stevie Ray Vaughan, and The Rolling Stones, whose surprise appearance in March 1977 (listed as (“The Cockroaches”) cemented El Mo’s reputation among marquee clubs such as New York’s CBGB and the Roxy in Los Angeles.

With a history of nurturing up-and-coming talent, The El Mo is known for giving stage to nascent artists, some who would become big names such as Tom Waits, Elvis Costel- lo, and a breakthrough U2 who performed at the very beginnings of their career. If any place in Toronto could be considered a monument to rock and roll, it’s the El Mocambo.

Sold to former Dragon’s Den star Michael Wekerle, it’s been brought back to life as a state-of-the-art club with a recording studio on the top floor and two stages that serve for live performances, streaming shows, video shoots, recordings, parties and more. In the words of Wekerle, “It’s not just a club. It’s a content factory for the world.” "