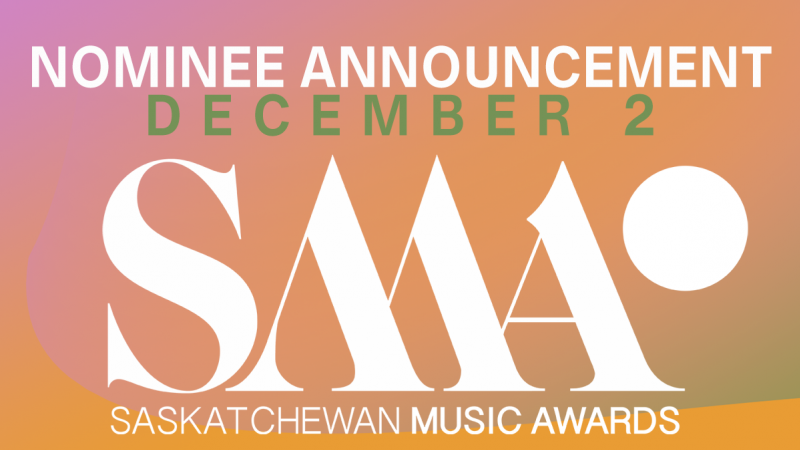 SaskMusic will announce the 2021 Saskatchewan Music Award Nominees at 10:30am, December 2/2021 via our social media, www.facebook.com/SaskMusic1/ and www.youtube.com/saskmusic.

The announcement will reveal nominees in the following categories: Alternative, Country, Electronic, Experimental or Contemporary, Hip Hop, Metal/Loud, R&B, Rock/Pop, Roots/Folk, and Indigenous Artist of the Year; Single of the Year, Music Video of the Year, Producer of the Year, Venue of the Year, and Industry Achievement; as well as the long list for The Best Saskatchewan Albums of 2021. The recipient of the Indigenous Music Achievement Award will be announced during the awards event, January 20/2022.

Following the nominee announcement, public voting on the Best Saskatchewan Albums long list will open, culminating in a Top Ten and, ultimately, the winner of the SMA for Album of the Year. As well, public voting will open to help determine the recipient of Venue of the Year and Industry Achievement. Information on these categories will be found at www.saskmusicawards.com following the announcement.

The awards are intended to honour excellence and celebrate the achievements of our Saskatchewan music industry members over the past year. The 2021 awards event will take place in a streaming format, featuring pre-filmed exclusive performances, on January 20/2022 via SaskMusic’s social media pages.

The SMAs are presented in conjunction with the Very Prairie Music Summit, an educational event for the Saskatchewan music industry, being held online January 21-23/2022. Please follow SaskMusic’s social media accounts and www.saskmusicawards.com for updates.

SaskMusic thanks Creative Saskatchewan and FACTOR (The Foundation Assisting Canadian Talent on Recordings) for their support.