Audiences in Regina excited to return to the big picture, big sound of the movie theatre can now
experience Brotherhood, the true, Canadian story of the Brotherhood of St. Andrew and their ill-fated
canoeing adventure in 1926, when it opens at Rainbow Cinemas Golden Mile on July 30th.
Brotherhood follows a band of teenage boys who set out across Ontario’s Balsam Lake in a 30-
foot war canoe, with two camp leaders, and are capsized by a deadly summer storm. Brotherhood
was co-financed by Creative Saskatchewan and co-produced by Saskatoon’s Karma Film. The
score was composed by Saskatoon-born and bred composer William Rowson (Big Muddy), who
will debut as a guest conductor at the Regina Symphony Orchestra, this fall.

“Tobi Lampard and her team at Creative Saskatchewan were essential in getting Brotherhood
financed,” says Vancouver-based director Richard Bell. “Film financing is a bit of a Rubik’s
Cube, but we figured out early on that a co-production between Ontario and Saskatchewan was
our best strategy. We’re stronger together, which incidentally is a theme of the film.”

Hailed as one of Canada’s most compelling and versatile young artists. He currently serves as the Artistic Advisor and Music Director of the Stratford Symphony Orchestra.  In 2019 he completed a 3-­‐year tenure as the Assistant Conductor of the Vancouver Symphony Orchestra, where he led the Grammy and Juno award-­‐winning ensemble in over 160 performances. To  great  acclaim,  he  conducted  the  VSO’s  inaugural  Sunset  Beach  outdoor concert to a crowd of over 14,000. William has collaborated with vocalists Meredith Hall, Rufus Müller, Lawrence Wiliford, Krisztina Szabó and Jann Arden, as well as instrumentalists Sarah Pratt, Nicholas Wright, Sharon Wei and astronaut Chris Hadfield.

Highly regarded in the New Music community, Rowson has conducted the premieres of over 65 new works and is a strong advocate for music by Canadian composers. An active composer as well as conductor, Rowson’s Fanfare for Canada’s 150th was premiered by the Toronto Symphony Orchestra, conducted by Thomas Dausgaard. This performance has been viewed

140,000 times on YouTube. In August 2018, his Short Variations on Waves was given its premiere by Ensemble Made in Canada at the Festival of the Sound, and has since been performed in every Canadian province and territory. Rowson has also composed the scores to several films including the 2019 Canadian feature film Brotherhood, which is playing in theatres across Canada throughout 2020.

Bill grew up in a musical family, starting the violin at age 3 in his hometown of Saskatoon. He began conducting while studying at the Curtis Institute of Music. He also holds degrees from the University  of  Toronto and Western University and has benefited from the mentorship of conductors Bramwell Tovey and Otto Tausk. 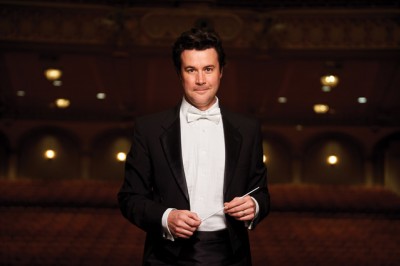