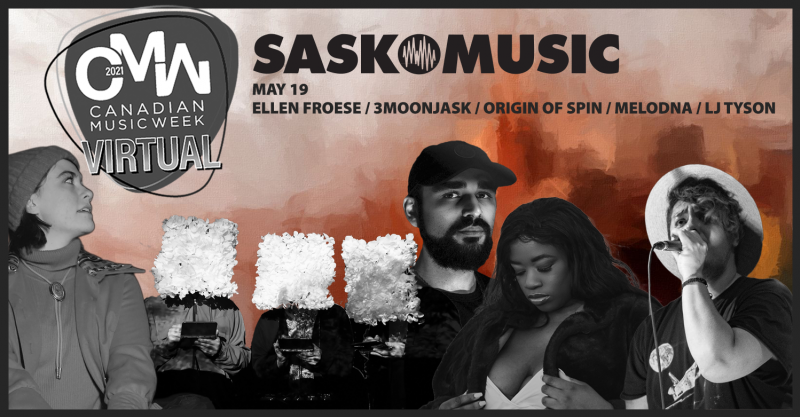 SaskMusic is pleased to present a Saskatchewan showcase at Canadian Music Week, taking place virtually May 18-21. Our presentation will be available through the CMW website for free to the public on Wednesday May 19, 2021 from 5-10pm (7:00pm–12:00am EST). Following the stream, the showcase will be available on demand for a further 6 months.

These showcases will be presented from the CMW website, rather than through the conference platform.

Our event will feature five Saskatchewan artists: 3 Moonjask, Ellen Froese, LJ Tyson, Melodna, and Origin of Spin, each of whom were filmed by SaskMusic earlier this year as part of our Winter Showcase initiative*. These live-filmed performances were purposefully created with the intention of having high-quality content ready for export-ready artists which could then be pitched to domestic and international music market events such as this. A panel of industry professionals was enlisted to make suitable selections for this specific event from amongst our Winter Showcase participants.

Additionally, Saskatchewan’s Aurora Bella, Kaye & Co, Phoenix and the SilverVoodoos, Tumbleweeds, and velours were selected for showcase inclusion directly by CMW festival organizers. The full CMW artist lineup can be viewed at https://cmw.net/festival/artists/.

Music fans and industry can enjoy the CMW festival for free this year at https://cmw.net/festival/

You can also register for the conference at https://cmw.net/conference/online-registration/
(SaskMusic members, message us about a discount code!)

Hailing from a dairy farm in the heart of Saskatchewan, young folk singer Ellen Froese has swiftly made her presence known in the Canadian music scene. As a folk artist performing solo and also with her rockin’ back-up band, the Hot Toddies, as well as an original member of successful bluegrass/folk group In With The Old, Froese has balanced multiple projects for the last few years. Whether performing a folk traditional, a rock ‘n’ roll classic, or her own compositions, Froese handles it with an air of authenticity – all tempered with a healthy dose of humour and self-deprecation.

LJ Tyson is a country-pop artist of Cree/Metis heritage from Prince Albert SK, identifying as bisexual. LJ uses his music to connect with diverse audiences and bridge the gaps that disconnect us. Growing up in a music scene rooted in country music helped him connect to others through the storytelling in his writing. Visiting many genres throughout his career, LJ has always come back to country music and has included the different genres into his sound. An LJ Tyson show will be high-energy and filled with wonderful storytelling and performance. The raspy uniqueness of LJ’s voice and the blend of pop-country he produces make him a must hear for music lovers.

3 Moonjask look as surreal on stage as they sound through headphones. Each member of the masked, lo-fi trio crafts mini universes somewhere between house, vaporwave and ambient music, sometimes colliding forcefully and others just washing along together in harmony. 3 Moonjask released their 3rd album “Lunar Elixir” in December 2019 with Toronto-based label Adhesive Sounds and Moorworks Tokyo. 3 Moonjask have toured extensively in Canada and Japan including large festivals such as Sled Island, BreakOut West, Forthwith, and Rainbow Trout Music Festival.

Writing her first song at 5 years old, Melodna knew that music would be a constant in her life. Growing in the respected shadow of her musically inclined father, she spent her early years writing songs, poetry, and singing her heart out anywhere she could. MELODNA has gone from singing in her church, to accompanying Don Moen and Lenny Leblanc in concert 2014. She was a part of gospel group, “Tehillah Minstrels,” 2015-2017. Since leaving the group, MELODNA embarked in her solo career while becoming a first-time mom. Her new life in parenthood gave all the gas she needed. Come 2019, she opened for Rich Homie Quan in Regina SK for her first solo performance. MELODNA has since released her first single, “KRYPTONITE,” in summer 2020 later followed by “Do You Miss It?” November 2020, honourably followed by her debut EP “KEEPSAKE”, released February 2021. Her latest has collected over 20,000 streams and counting. Growing as an artist, she has also devoted substantial focus to speaking out on social injustices as 1/3 hosts for “Let’s Talk About It”. Walking proud in her Christian faith and artist progression, MELODNA is on a fast track of recognition while using her platform for social awareness in the process.

Origin of Spin is a Pakistani/Canadian beatmaker who produces a mix of ‘90s boom bap, trip-hop, downtempo, jazz and electronica. Raised in the analog era of turntables, drum machines and samplers, he navigates through technology in the digital age searching for sounds which invoke emotion, passion and impact the listener in a creatively profound way. While in Vancouver he spent six years with the Chapel Sound collective, playing a weekly DJ residency at OPUS Hotel and opening for acts such as The Internet, People Under the Stairs, Zion I, DJ Q-Bert, Dam-Funk, MYKA 9 & Factor Chandelier, and Def3. Today, rapping as an MC for Sask-based hip-hop/R&B band People of the Sun, and a part of the 11 Hooks art collective, he was recently nominated for Hip-Hop Artist of the Year & Electronic Artist of the Year at the 2020 SaskMusic Awards. Currently working on his second album ‘S Y N C’, second beat-tape ‘BLVNT TAPE VOL. 2’, joint EP with singer/songwriter Ava Wild, and new album with People of the Sun, all to be released within the next year.

Now in its 38th year, the Canadian Music Week Conference (May 18-21) is a premier annual music business and networking event in Canada, and this time around it’s being produced live, online & streamed worldwide. They’re innovating due to COVID-19 and promise to deliver a world class experience. This year includes a 4-day music summit covering all sectors of the industry delivered in a totally interactive streamed format, and a platform for domestic and international delegates to exchange ideas, explore trends & make meetings connections online. An amazing array of live streaming sessions from industry pro’s about breakthroughs and insights into global challenges facing an ever-changing music landscape.

SaskMusic is a non-profit association that represents, promotes and stimulates growth and development of the commercial music industry of Saskatchewan, Canada. We offer programming including export assistance, career guidance, workshops, marketing, artist listings, networking opportunities and more. Our artists and industry professionals produce music in an extensive array of genres. SaskMusic is a source of information and resources for both the public, and the music industry.

Over the past year, SaskMusic has responded to the changing landscape for export marketing of our artists, and is continuing to work not only on export initiatives and assistance to our artists, but has been engaged extensively in advocacy for and awareness of the extreme challenges facing the local and national music industry due to the pandemic.

*Our showcases were filmed in adherence with all local public health safety protocols/guidelines that were in place at the time of filming.