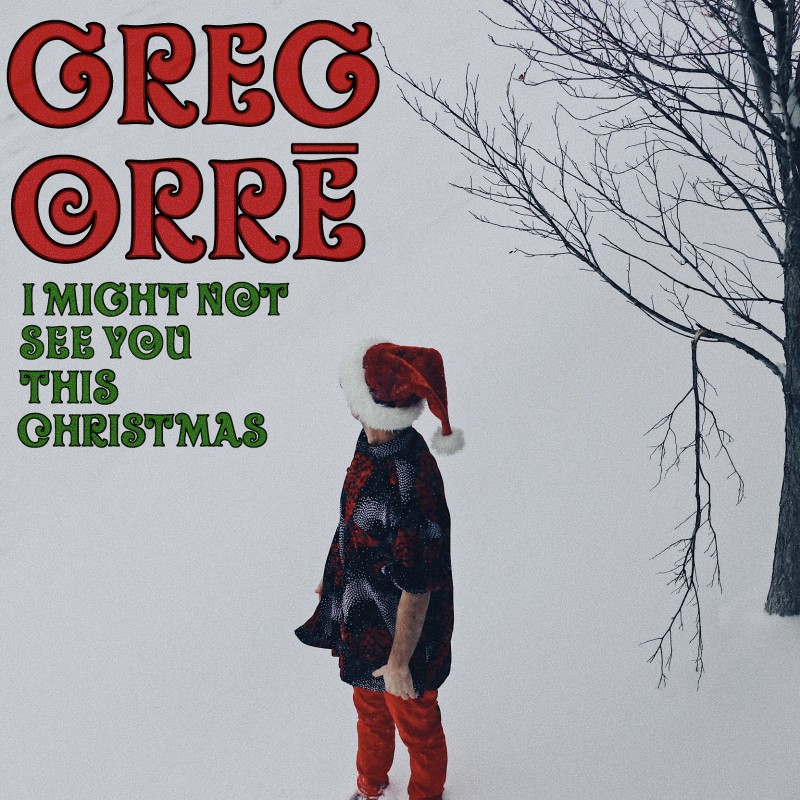 Saskatoon based multidisciplinary artist Greg Orrē (pronounced gregory) is proud to announce the release of his first original Christmas song, “I Might Not See You This Christmas”.

Written and self-recorded by Greg Orrē earlier this October as he reflected on what the holidays will look like in the midst of a global pandemic, the melancholy Christmas single features singing bowl sounds & additional subtle background vocals from Greg’s partner - and creative partner - Kristen Boyé. Boyé also filmed the accompanying music video that will premiere on Dec 9 following the Nov 27 release of the song. This single is the follow up to his debut solo album I Am In It Vol 1 (Aug 28/20).

For a few years while growing up, Greg Orrē played the organ each Sunday in his small hometown church. He always looked forward to the Christmas season when he was able to pick songs for the congregation to sing. He leaned towards more reflective songs like “Away In A Manger” and “What Child Is This”, although he lit up when playing “Joy To The World”. On his first original Christmas song, “I Might Not See You This Christmas”, he similarly meshes pensiveness and joy while also playing with the timeless style of holiday standard “I’ll Be Home for Christmas”.

When asked about the making of the song, Greg Orrē shares: “I wrote it in between Thanksgiving and Halloween… I was actually beginning to record a different Christmas song that I wrote years ago with Kristen called “Happy Christmas Day”, but that song just wasn’t feeling right. I was reflecting on how we were unable to see a lot of family and friends during Thanksgiving... watching case numbers continue to rise in the province while looking onward to how the pandemic is going to affect everyone during the upcoming Christmas season. As hopeful as I am, I also recognize that this Christmas may look and feel differently than what we were expecting.”

As he did with most of his debut album, Greg Orrē wrote and self-recorded this single in his self-declared “Red Chair of Inspiration” from the corner of his Saskatoon apartment living room. In a manner similar to Boyé’s contributions on I Am In It, Vol 1’s  “Be Free With Love”, she plays a mesmerizing heart-chakra tuned singing bowl. The hypnotic and healing sounds encourage listeners to open their hearts to receive all the love that Greg Orrē sings about sending through the chilly air of 2020’s final month.

ABOUT GREG ORRĒ: Greg Orrē  (pronounced gregory) is an artist living in Saskatoon who expresses his creativity through music, poetry, painting, video and design. He quit his permanent elementary school teaching job in 2016 to pursue his goals in music and art. As the lead singer & keyboardist of Too Soon Monsoon since the end of 2016, Greg has released one LP and three EPs. He has toured Western Canada multiple times and performed at Breakout West, Saskatchewan Jazz Festival, Winterruption, Big Winter Classic, and Ness Creek Music Festival (as well as a planned 2020 JUNOfest headlining show). While Too Soon Monsoon continues to work on their sophomore LP, Greg Orrē is also establishing himself as a solo artist. The prolific, multidisciplinary artist is now sharing the comprehensive I Am In It project consisting of three full-length albums, two poetry companion books, plus video projects and paintings related to each album. His debut solo album I Am In It, Vol. 1 was released Aug 28/20 and his first poetry book I Am In It: a collection of poems was released Oct 20/20. He is currently self-recording most of his follow up LP while once again collaborating on a few songs with producer/mixer Josh Palmer (worked on Vol. 1). When he isn’t writing or recording music, Greg Orrē also enjoys meditating, practicing yoga, playing tennis, making music videos with partner Kristen Boyé, writing short stories and painting - he created the oil-pastel self-portrait as seen on I Am In It Vol. 1’s album cover. Greg Orrē is involved in his community as a freelance blogger for Tourism Saskatoon, volunteer writer for Canadian music network Cups n Cakes and a mentor/judge for the Prince Albert Youth Talent Show.