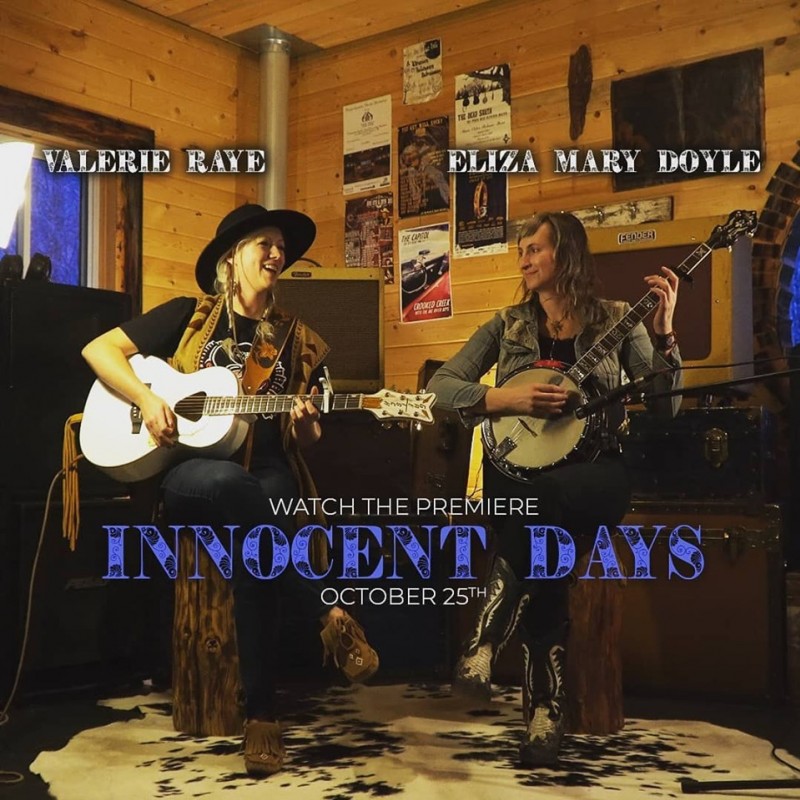 1st release a collaboration by Eliza Mary Doyle and Valerie Raye on the release of “Innocent Days”.

New Saskatchewan Based Record Label “Prairie Sound Records” Launches with a collaboration by Eliza Mary Doyle and Valerie Raye on the release of “Innocent Days”.

All proceeds will be donated to the Jack Millikin Centre in Big River, Saskatchewan.

Two women at the forefront of “kicking up the dust” at the grass roots level of the Saskatchewan music community, Eliza Mary Doyle and Valerie Raye (previously Val Halla) have joined forces to cover the song “Innocent Days”, written by Big River, Sask. songwriter Gavin Millikin. Millikin is a member of the band Grain Report who had first recorded and released the song on their 2015 album “Greatest Hits, Vol. 1”.

This also marks the first release for Valerie Raye’s newly formed record label Prairie Sound Records, which will focus on the export and promotion of music and artists originating from the prairie provinces (Saskatchewan, Manitoba, Alberta, and various Indigenous Nations of the prairies) to international markets, while at the same time having a reciprocal mandate of reinvesting into the local music communities with showcases, workshops, live concert events, sponsorships and local partnerships, and educational initiatives.  Prairie Sound Records will focus on working in tandem with government music industry associations (Alberta Music, Sask Music, Manitoba Music), as well as Sâkêwêwak Indigenous Artists’ Collective, who all share the goal of promoting prairie musicians and artists.

Eliza Mary Doyle and Valerie Raye were the sole performers on this recording of “Innocent Days”, with Doyle playing Dobro and Banjo, and Raye performing Acoustic Guitar and Accordion on the track.  Both Doyle and Raye switch off carrying the lead vocal of the song, and their perfectly matched harmonies that showcase their folk roots influences and vocal timbres.

The music video for “Innocent Days” was filmed & directed by Nathan Puffalt of Prairie Rising Productions, on location in Big River, Sask.  Puffalt has previously worked with Saskatchewan musicians to bring their songs to a visual medium, and earlier this year had his first official screening as a filmmaker after releasing the documentary “Essence - A Ness Creek Story”, commissioned by The Ness Creek Cultural and Recreational Society, to promote and document the story of the world-renowned Ness Creek Music Festival in northern Saskatchewan.

Eliza Mary Doyle who is both a talented singer/songwriter and multi-instrumentalist/session musician, also hosts the annual Doyle Fest music festival which boasted 30+ musical acts this past September while finding a new partner in Eagle Creek Regional Park for a fully serviced camping festival location just west of Saskatoon.  Proceeds from Doyle Fest go towards supporting music education initiatives in Saskatchewan, and Doyle has been actively involved in these educational initiatives first hand. A former school teacher, she recently participated as an Artist in Residence in the northern community of Stanley Mission, Sask., collecting donations of musical instruments to take to the community, and spending a month teaching music lessons and music education in the community’s classrooms.  Doyle continues to perform as a solo artist and original songwriter, and has a long list of session credits and accolades as a touring performer with Saskatchewan groups The Midnight Roses and The Dead South.

Valerie Raye is currently touring in the United States, and preparing to release her 6th full length record “Gravel Roads” in early 2020.  While the previous 3 records were released under her Val Halla titled artist project, this album marks a return to her folk roots beginnings and first two albums also released under her legal name.  This return to using her legal name as a songwriter, coincides with a new creative vision towards a representation of artistic truth, and begins the next phase in a music career that has already spanned 20 years. Founding Priarie Sound Records has also been a lifelong goal finally realized, and the first artists to be signed to the label will be announced in early 2020. Valerie Raye has also worked to bring music education to youth through initiatives like the “Keep on Rockin’ In The Free World” benefit concert held at the Regina Cultural Exchange which collected music instrument donations, lesson books, and financial contributions for the Rock School, in Kabul, Afghanistan, where students of any gender were allowed to participate in learning instruments like the guitar, bass, or drums, along with the rock music of bands whose works at one time were banned in the country while under Taliban control.

These two community engaged artists initially teamed up together in the creation of the recording for “Innocent Days” to support a fundraiser for independent Saskatchewan radio stations CJTR and CFCR.  The song was well received, and upon teaming up with Nathan Puffalt to create a music video for the track (which includes cameos by songwriter Gavin Millikin and his family filmed inside the newly constructed Jack Millikin Centre), all parties involved in this artistic work agreed any proceeds of the release of the single will be donated to the Jack Millikin Centre.  Physical CD copies of the song are still available from CJTR in Regina, and CFCR in Saskatoon, for anyone who would like to purchase the “Got It Covered” compilation of Saskatchewan artists covering other Saskatchewan songwriters.  The proceeds of the physical compilation CD’s go towards supporting these local community radio stations, and can be purchased through contacting the stations directly.

For more on the inspiration behind and creation of the Jack Millikin Centre and the continued need for funds and fundraising, please watch this short video clip featuring Gavin Millikin: https://youtu.be/YhFYh0enNjE

The cover of Innocent Days featuring Eliza Mary Doyle and Valerie Raye, will be released on Spotify, iTunes and Apple Music, Tidal, Google Play Music, Amazon Music, and all digital streaming retailers on Friday October 25th.  The music video will premiere live from YouTube on the afternoon of October 25th at 1:00pm in Saskatchewan (12PM PST/3PM EST for those outside of Saskatchewan).  The music video will then have a second release date for the uploaded and release to the Facebook platform, on Friday November 8th.

For information or interview requests regarding the release of “Innocent Days” please contact:

In regards to the music video for “Innocent Days”:

For further information on the songwriter and the Jack Millikin Centre: