SaskMusic returns to Nashville TN for the annual Americana Music Festival & Conference. Continuing our series of successful collaborations with Alberta Music, Manitoba Music, and BreakOut West, we will present two showcase events to the music industry in Nashville under the BreakOut West banner, as well as attending networking events, representing the Saskatchewan music industry and in particular our folk, roots, and bluegrass artists.

On September 10, our Music Row Dinner features music from SK, AB and MB, including performances by Jay & Jo Trudel and Val Halla at a private event for targeted music industry professionals.

Then, the BreakOut West BBQ on September 12 will feature Shantaia. This event is open to music industry professionals as well as Americana delegates.

The 20th annual AMERICANAFEST® gathers thousands of artists, fans, and industry professionals from all over the world in Nashville. It’s the must-attend event for anyone who loves the melting pot of Americana's influences including roots, folk, country, blues and soul-based music. Each year, AMERICANAFEST brings together legendary artists, the next generation of rising stars, fans, and industry professionals for six days of music and education.

“Western Canada is known for cold winters and hot music but is no stranger to the joys of a summer afternoon backyard BBQ party. BreakOut West brings a stellar presentation of new music plus beer, food trucks, and a dose of East Nashville attitude to the backyard at The Groove.”

Shantaia
With powerful vocals consisting of a smooth tone with a hint of rasp, country singer/songwriter Shantaia has an unforgettable voice. She’s released two singles to Canadian country radio, and is working on new music with her team. She has toured the festival circuit, playing Country Thunder Saskatchewan, Dauphin’s Countryfest, North by Northeast and Cavendish Beach Music Festival as well as opening for countless artists such as The Bellamy Brothers, Charlie Major, Kane Brown, Ryan Hurd, Emerson Drive, Chris Lane, and Cold Creek County. Shantaia will be showcasing at Country Music Week (Calgary AB) and is looking forward to her first showcase in Nashville for Americana.

Val Halla
Val Halla combines country, blues, rock, and folk, with soulful and vulnerable lyricism to achieve a unique sound that is heavily autobiographical. She has performed hundreds of shows across Canada, the United States, and Europe, bringing her gritty style of alternative roots music to fans of blue-collar storytelling, while also being acknowledged for her capabilities on the guitar by industry trade magazines and brands. Val has worked with other notable artists like Ted Nugent, Elliot Randall (Steely Dan), Eric Burdon (The Animals), and Burton Cummings (The Guess Who). Her new album “Gravel Roads” is due shortly.

Jay and Jo Trudel
Janaya and Jolissa Trudel pair up to form a vibrant sister-duo, embodying both joy and depth in one double-batted swing. Jay & Jo released their Saskatchewan Country Music Award-nominated debut album “Grounded and Light” in 2017 and have since then received acclaim including the SCMA “Roots Group of the Year” 2019. Their soul-stretching introspective lyrics, organic sound, and airtight harmonies are a force to be reckoned with, and their lighthearted presence on stage captivates with a life of its own. Vulnerably, boldly, the sisters share themselves in and through their craft, unafraid to touch on subjects from despair to desire.

Kacy & Clayton
The music Kacy & Clayton make is inextricable from where they grew up; the hills, barns, and remoteness of the Wood Mountain, Saskatchewan area are in these songs, with a bittersweet acknowledgement that this music has taken them far from home. Their sound is equal parts homespun, coming from a family and community where playing music is an ever-present part of social gatherings, and the rare country, blues, and English folk rock they obsess over and collect. It’s an arresting amalgamation of psychedelic folk, English folk revival and the ancestral music of Southern Appalachia. Their new album “Carrying On” (New West Records) was produced by Jeff Tweedy and will be available October 4. Having toured almost nonstop for the last two years, Carrying On was conceived and honed on the road and recorded mostly as live takes with the minimum of overdubs. 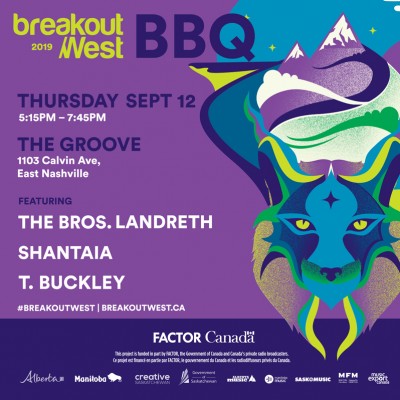