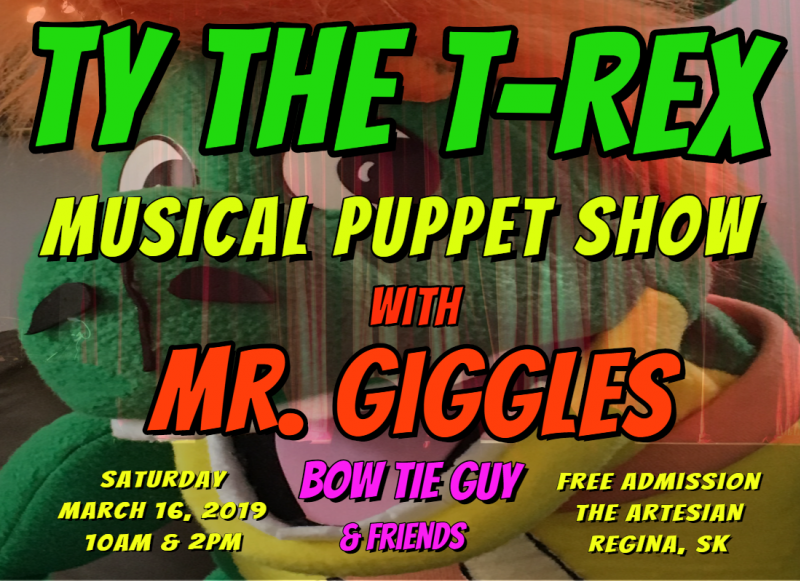 A Saskatchewan-produced cartoon and its effervescent lead character, Ty the T-REX, are moving their shows and music beyond the screen and into live performances beginning this spring 2019. Since 2007, creators Paul Runalls and Chris Atkinson have been producing award-winning children’s music and cartoons, and are eager to perform the music for live audiences. The brand new Musical Puppet Show of Ty the T-REX will star impressionist Mr. Giggles (Darren McClelland of Regina), musical pianist Mr. Bowtie Guy (Atkinson), and an array of Ty the T-REX’s puppet friends.

The show is a family-friendly musical puppet performance that lasts approximately 60-minutes and is perfect for grandparents, parents and of course children. The show incorporates Ty the T-REX’s funny personality and his internationally-recognized music to share important messages like taking time for friends and family, looking after your health by washing your hands and brushing your teeth, looking after the environment by recycling properly and encouraging others to try new things.

Undertaking an unique approach to improving and refining the new

Ty the T-REX’s musical puppet show, McClelland and Atkinson are going to seek during the live setting “audience voice” to help them enrich and enhance their show. The audience will have the opportunity to provide family-friendly feedback on what they appreciated and considerations for changing with respect to the songs, characters, humour, storyline, and engagement activities of the show. Feedback will be gathered in 3-ways: electronically, paper-based and by the performers hosting a short discussion after the show.

Upon considering and synthesizing the Regina audience’s voice on the likes and suggestions for improvements, Ty the T-REX and his friends will adjust their show and then plan to embark on a Saskatchewan summer performance tour for other family-friendly audience’s to enjoy. For further information about booking Ty’s the T-REX’s musical puppet show for your community or festival events, please contact the team via their website at www.tythetrex.com or directly by phone at (306-515-4991) or (306-529-0604).

About Ty the T-Rex

Ty the T-REX and his dinosaur friends were originally created and produced in Saskatchewan as part of CityTV Television musical cartoon series for young children. The television pilot included four 10-minute cartoons and accompanying music videos. The television series was not extended, but the Ty the –REX music series continued. Currently Ty the T-REX has over 20 songs available and a few of the newer ones have been used for creating additional music cartoons for children. Ty the T-REX has proudly received international recognition over the years. Several of the songs have received recognition by the International Songwriting Competition within the Children’s category. The international recognitions include:

Wish Wish I Was a Fish Bath Time

Leading the singing and puppeteering is the humorous and entertaining Darren McClelland, while Atkinson will be playing keyboards and providing backup vocals for the show. The two-person team will incorporate songs from the award-winning Ty the T-REX albums, along with traditional children’s songs to create an entertaining and thoughtful show for children and families to giggle, learn and enjoy! McClelland is a Saskatchewan performer that included being a lead singer and frontman of 80’s band, while composer Runalls (songwriter) has been entertaining children and their parents for over thirty years and was recognized in the Saskatchewan Legislature for his contributions to children’s songwriting. Atkinson has been in the education field for over 30 years, co-writing the music (lyrics) with Runalls, and producing music cartoons for children for the past 10 years.

Media are invited to a press event and premiere shows The Artesian, Regina, Saturday March 16, 10:00am & 2:00pm