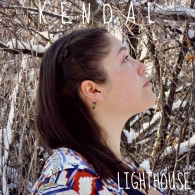 Love is in the airwaves! Moose Jaw singer-songwriter Kendal will be releasing her 2nd single “Lighthouse” on Friday, February 13th, in the spirit of Valentine's Day. “I wanted to release this song, on this date, because of the deeper meaning it has for me personally,” said Kendal. “I wrote it for my partner, who I met on Valentine's Day, which is also her birthday. It’s a very special day for us; this single release is part of her 25th birthday present, and our 5 year anniversary!”

Kendal's first single “Fire” was released back in October 2014 and her authentic brand of pop music with powerful vocals is refreshing to the Saskatchewan music scene. Kendal hopes people will enjoy, and “feel the love,” when they hear “Lighthouse” on February 13th.
Like Kendal S. on Facebook to stay up to date on what’s next for the emerging artist.
www.facebook.com/kendalmusic