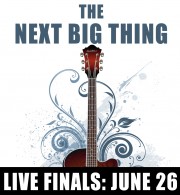 Ten emerging country artists have been selected as semi-finalists in the 2014 version of The Next Big Thing, competing for a chance to take their careers to the next level and win a custom-tailored prize package valued at more than $15,000 –  consisting of $10,000 cash PLUS options of their choosing, such as a professional single released to national radio, showcasing for music industry professionals, hands-on career guidance, and more.

Following a call for submissions that went out across Saskatchewan, artists submitted two original music tracks plus biographical and other information for consideration in the competition. From this year’s talented pool of artists, a panel of music industry professionals has determined that this year’s Top 10 artists are (in alphabetical order):

Information on the Top 10 semi-finalists is available online at www.bigdog927.com for fans to preview and find out about these talented artists. The Top 3 finalists, to be announced on June 10, will perform in a showdown of their original music live for the public and a panel of music industry professionals in the Finals show on Thursday, June 26. An esteemed panel of Canadian music industry professionals is being brought in to adjudicate their performances and select the winner of this year’s Next Big Thing, to be announced that same evening.