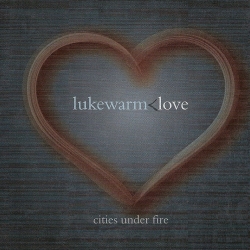 “Cities Under Fires debut album ‘Lukewarm Love’ is an alternative rock album filled with dynamic melodies and energetic beats. The honest and passionate lyrics are truly from the heart. Cities Under Fire teamed up with Kelvin Funkner (NCR Studios) to produce the album. Drums and guitars were tracked at Soren Lonnqvists, Studio Downe Under (Abbotsford, BC), with vocals and additional instruments recorded at Kelvin’s own studio in Aylsham, SK (NCR Studios). It was mixed and mastered by Mark Troyer of Muzikhaus Studios (Three Hills, AB).”

Produced by: Kelvin Funkner and Cities Under Fire. Recorded at: Studio Downe Under and NCR Studios. For more info: www.citiesunderfire.com or www.facebook.com/citiesunderfire