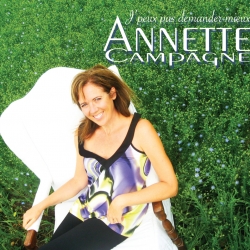 “Hot on the heels of her 2009 English release ‘You GottaLaugh’ comes Annette Campagne’s second solo French album, ‘J’peux Pas Demander Mieux’. If you long for a contemporary folk/pop writing style with strong melodies you can sink your voice into and ‘feel good’ lyrics that will leave you with a sense of ‘down to earth faith’, then this album is a must! She is ‘La Sheryl Crow Franco’ of the Fransaskois, the bilingual straight shooting poet of a prairie girl who has seen the world but who revels in her prairie roots, writing all songs and co-producing with Dave Lawlor and Don db Benedictson. ‘J’peux Pas Demander Mieux’, meaning ‘I Can’t Ask For Anything Better’, is the work of an artist whose mettle has been tested!”

Produced by: Annette Campagne and Dave Lawlor with the help of Don Benedicston.  Recorded at: Eagle Beagle Studio and Unity Gain Productions. For more info: www.annettemusic.ca