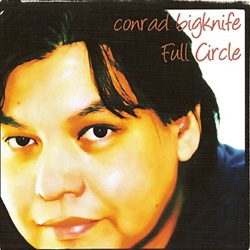 “Conrad has found his “true sound” through a mix of soaring vocals, shimmering guitars and catchy choruses. The result is an album with alternative-country and jazz influences. Conrad collaborated with friends to write a few of the songs, with the majority written by Conrad and his wife, Shannon. Canadian, U.S. and International radio stations have picked up several songs from the album.” Produced by: Conrad BigKnife. Recorded at: Home Studio, Regina. More info: www.conradbigknife.com.