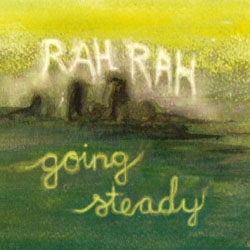 “The album bridges lush harmonies with party hollers. Lyrically Burns shines as wise beyond his years, touching on love, small town living, and NAFTA. With guitars, keyboards, and violins a plenty, ‘Going Steady’, blazes with enough warmth and sincerity to keep you warm through a long prairie winter. The band, which features members of Sylvie, Geronimo, and Despistado has been invited to perform Pop! Montreal two years in a row, voted "Best Band in Regina" by a 2007 Prairie Dog Reader's Poll, played to a capacity crowd at a 2008 NXNE showcase, and have shared the stage with such acts as Wintersleep, Malajube, Mother Mother, Bedouine Soundclash, and Elliott Brood.”