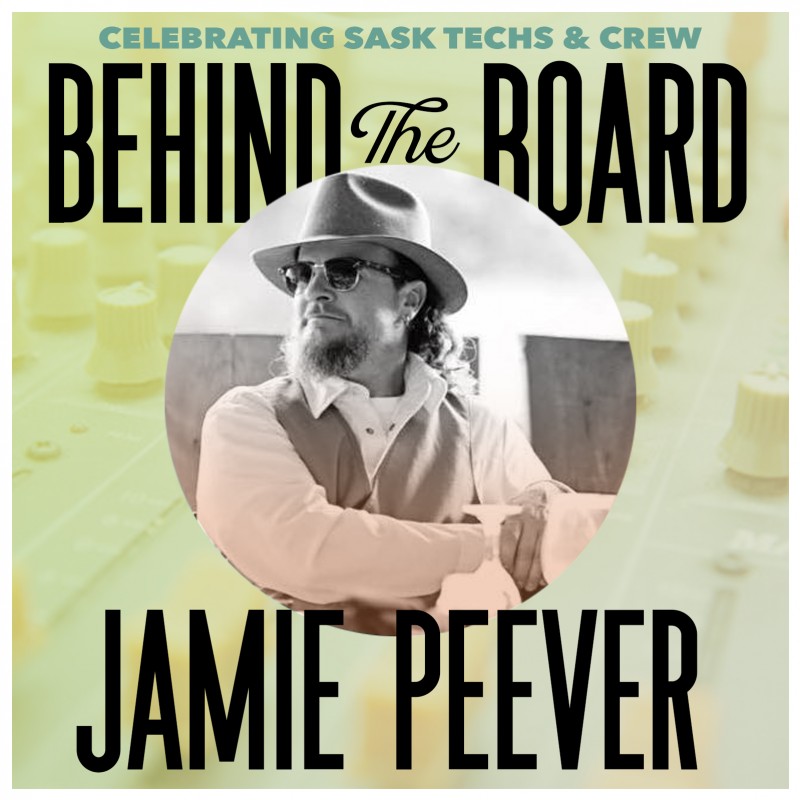 Behind the Board: Jamie Peever

About me: Jamie has been involved in the entertainment industry for 34 years. He received his recording engineering degree from Columbia Academy in Edmonton in 1989. He then went on tour for the following 2 years, finally making his home Saskatoon in 1991.

He has been involved with the Ness Creek Festival (FOH sound and formerly on the entertainment committee) for 30 years, and the Northern Lights Bluegrass and Old Tyme music festival for 15 years. He has worked the Electric Sky Festival, and Country at the Creek festival (both at the Ness Creek festival site.) He has been involved with the Napatak Ramble near La Ronge, Doylefest, Prairie Sky Festival as well as working at Merlefest in Wilksboro, North Carolina for past few years.

During his time in Saskatoon, Jamie has been the house live sound tech at Amigos, Bud’s on Broadway, Louis’, The Warehouse, Lydia’s, Crawdaddy’s, The Publican, The Roxy and The Fez, and Bon Temps Café and has worked at one time or another at most of the venues in Saskatoon as well as the Dekker Centre in North Battleford.

Jamie believes in the saying “Do what you love and you will never work a day in your life” and is happy to have a long career doing something that throws curve balls his way, challenges him and yet keeps a smile on his face.

He also works as a producer, sound designer, installer, lecturer, manager and a booking agent.

Philosophy on mixing sound: I have worked with all kinds of gear in all states of repair and the trick is to know what you want it to sound like before you turn anything on. I once saw a man on the Outdoor Life Channel that had made a life-size wooden carving of a grizzly bear standing on his hind legs with nothing but a chainsaw. He was asked by an interviewer, “How did you come up with such a realistic carving?” He replied, “I just cut away everything that didn’t look like a grizzly bear!” That has been a philosophy of mine when it comes to mixing sound. Just cut away anything that doesn’t sound like the band. Bad frequencies in the room, to strange over-tones that muddy up and take away from the performance and clarity get cut out of the mix.

Favourite gear: My favourite gear that I have been using for the past number of years has been the Ear Trumpet Labs microphones. They are great for recording and micing acoustic music live. I loved them so much I became their first Canadian dealer.

Advice: A piece of advice for all musicians out there, keep working on your craft and make sure your music is heard by as many people as possible. I have so many artists in my world community that have gone on to doing wonderful things in the industry by learning something every day and persevering through the hard or slow times.