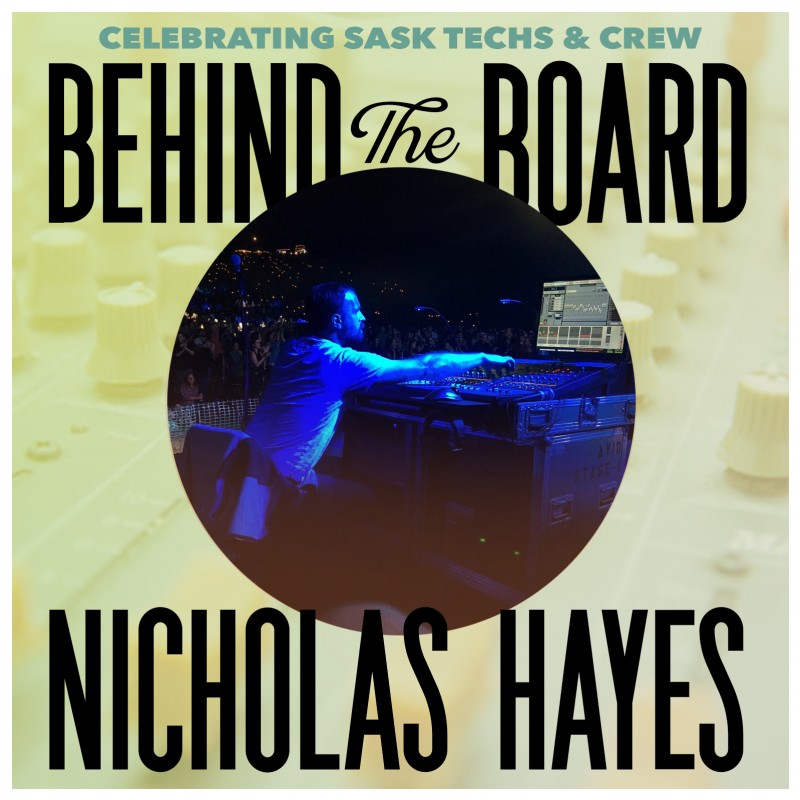 Behind the Board: Nicholas Hayes

About me: I have been doing sound professionally over 21 years working in the fields of recording, live sound FOH & monitors (specializing in-ears), many many festivals, award shows, adjudicating, production, system teching, musicals, broadcast, streaming, consulting, corporate, sales the list goes on.

I have been very fortunate to work with and tour with some amazing artists over the years. Adam Gregory, Lisa Hewitt, Brett Kissel, Tenille Arts, to name just a few.

Over the course of my career, I have also worked in a great deal of venues. I first got hired at Grant MacEwan University mixing in their theatre while still in school. My first gig in that theatre was with Jennifer Batten who played guitar for Michael Jackson, other favourite venues that I have worked out of are the Winspear Centre in Edmonton, and TCU Place in Saskatoon. Another gig that means a lot to me is doing monitors on the mainstage at the Edmonton Folk Music Festival.

Philosophy mixing live sound: There are a few here.

1. There is always something new to learn. Might be big might be small, it might be a corporate gig, but you can always find a way to improve on something.

2. Listen, and then uncomplicate. Consoles today have a lot going on under the hood. Just because you can turn a certain thing on or use a plug in on everything does not mean you should.

3. Less is often more. This one is mega important for so so many things with sound and shows and goes back to listen and uncomplicate. Too often you will see people mix into the red. (If you're not redlining you're not headlining right? WRONG.) Try turning some things down to create clarity.

Favourite shows you've mixed: This is a tough one as there are so many acts I have gotten to work with over the years. Adam Gregory, Lisa Hewitt, Brett Kissel, Tenille Arts, Kal Hourd have all consistently blown my mind with their performances over and over again.

One of my all time favourites was the first time I worked with Brandi Carlile. The word magic is all that I can say. It was at the Edmonton Folk Music Festival, we had a twenty minute change over. I don’t think Brandi made sound check as she had a sore throat earlier in the day, so it was a throw and go if memory serves. Meaning the band would tell me roughly what they want, and we dial in as we go. The hill at the Edmonton Folk Fest lit up with thousands of candles. Brandi and the twins came out and put down a legendary show, it was that moment where everything was coming together. The pocket on stage was established and the performance went down in history with the band and the festival. A year later they came back, and the twins would yell as they saw me across the stage for soundcheck “It’s the same guy!!! You have no idea just how that gig went down as legend for our band.” And then we did it all over again.

Other favourite acts, Maroon 5, LP, Levon Helm, Gord Downie to name a few. I have way too many favourite shows to mention, I could go on and on each one being my favourite for a different reason.

Advice for new or emerging artists: You got your songs down, you have practiced and jammed. Now practice setting up and taking your gear down, streamline your setup. It sounds silly, but it will help when sound check times are tight and the nerves kick in a bit. It will allow you to focus on playing those songs.

I know nerves might be high during soundcheck. Once set up and after a few tweaks to your gear, it's time to listen to your sound tech for the check. Often with newer bands people noodle endlessly, listen for what the tech needs to be played and pay attention when they are shipping sound to the monitors. If you are not paying attention, you might not get what you need dialed in.

During setup, if you want to stay friends with your sound tech, please, please, please watch out for their ears. If they are micing your drums or guitar amp do not play them or blast your amp while their head is right there setting up a mic.

Advice for established/touring artists: In the world of stage plots and input lists, I am not sure how this happens, but without fail the rider for the band that the production company people get on site is usually out of date. Do not take it out on the local sound people, they are just doing their job, and they are there to get your show off the ground.

I always made a habit of carrying extra up to date plots with me at all times for all the various stage managers and sound companies at festivals. Sometimes the plot is right, but there is just not enough copies. If an extra copy of stage plot/input list makes for a more organized setup and change over, then great!