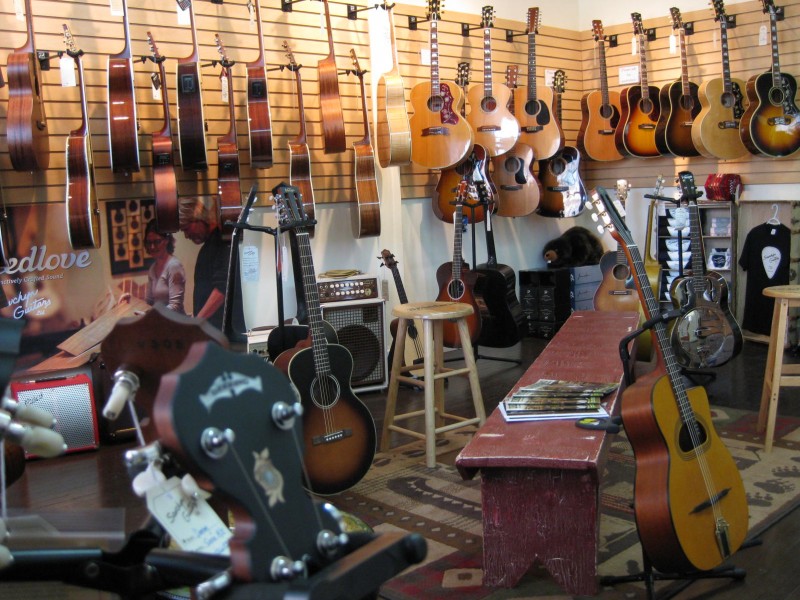 44 years ago, Peter Sawchyn started building instruments out of a purpose-built shop housed in a two-storey garage in his backyard. His focus back then was on custom-built guitars and mandolins, as well as offering repairs for individual customers and music stores in Regina. Although the space suited his needs at first, Peter eventually outgrew it and started thinking about how a larger space could accommodate not only more building projects, but other music-related ideas that he’d always had on the back burner.

In the fall of 2011, fate landed on Peter’s side. A friend of a friend told him about a space on Dewdney Avenue that had been vacant for some time. Although Peter had already looked at several buildings in Regina’s Warehouse District, none of them seemed to be just the right space for the ideas in his head. This new place was different. As soon as Peter and his wife (and soon to be business partner) Kendra walked into 2132 Dewdney Avenue, they were embraced by the light that the south-facing windows let in and could instantly see the potential.

“I guess the rest is history, or so it seems now,” Peter states. Peter and Kendra joined forces, incorporated Peter’s business, and became SAWCHYN GUITARS LTD. After several months of renovating the space, they officially opened the doors on April 1, 2012. Their store is unique in the sense that it is a retail space, expert repair and restoration shop, and luthier shop all in one.

Peter’s lovingly-made guitars and mandolins are considered some of the best in the country. He’s got an old-school mentality when it comes to the custom, hand-built process. Unlike many other luthiers, he does not use CNC (computer numerical control) machines; everything is done by hand. Most guitar makers will use these machines to help with the mass production of their instruments, which is how they’re able to sell to multiple stores. In Sawchyn’s case, however, the custom-build part of their business has been so successful that they seldom can keep Sawchyn brand guitars on the wall of their own store! Luckily, they are also the authorized dealers for several well-known brands, namely Guild Guitars, Breedlove, Sigma, Rainsong, Martin Guitars and Deering Banjos. Affordable products are something they feel very passionate about. When a purchase of any instrument is made, they want the customer to leave feeling that they have not only paid a fair price, but left with the instrument that is the right one for them.

Peter’s ‘Beaver Tail’ is a mandolin that he has designed, developed and branded himself. These instruments have flat tops and backs, and are styled after the Gibson army and navy mandolins made around 1915-1920. These mandolins, mandolas, and octave mandolins, along with bouzoukis, have gained popularity over the past year or so. They are well-priced, completely hand-built, and the sound of each instrument is incredible. Like Sawchyn’s guitars, they are struggling to keep them in stock, with demand outweighing production right now. The fact that he’s been building them for over 40 years also makes Peter an expert repair person. The shop does anything from change strings, to complete restorations of vintage instruments, working with anything that has strings - acoustic or electric.

Although Sawchyn Guitars are busy with the retail side of things, they also host concerts, workshops and a monthly ukulele circle all in their storefront. February 2016 saw the start of their Saturday morning Java Jam. “What could be better on a frosty February morning than a hot cup of coffee and the opportunity to get together with a group of people to sing and play some tunes?” This meeting of minds and instruments carried through to the end of March and will resume again in the fall. Aside from retail sales and in-store events, the pair also made an appearance at Regina Folk Festival last year. “It was a great three days of showing off our wares and introducing new people to the store. We hope to be invited back again this year, as our plan is to Uke It Up!

For more information, check out www.sawchyn.com, or better yet, pop into the shop and say hello!