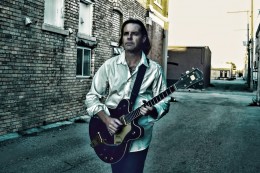 “In the house where I grew up, my parents had an old Baldwin upright piano that I was completely fascinated with. I would hammer on the keys playing along to The Beatles’ Sgt. Pepper album and pretend I was John Lennon. I would daydream that I was playing a concert and sitting in with the Fab 4. I had no idea what I was playing, but it just felt so good!”

By age 15, Galloway formed his first rock band Avernus, comprised of musical high school friends, and started writing songs. After graduating high school, Jim began making demos on a cassette recorder, preparing for what would become the beginning of his career in music.

“Armed with about 20 demo tapes, I jumped in my blue Pontiac Acadian with my 1976 Gibson Les Paul Gold Top Deluxe guitar, and headed to Edmonton to ‘take on the music industry.’ I banged on every agency, recording studio and band audition door that I could find. This is how you social-networked in the early ‘80s,” he laughs.

Galloway’s leap of faith paid off, and he started playing full time. “I was earning a meagre living playing music full time within weeks of hitting Edmonton with my homemade cassette tapes! I was in heaven!”

Eventually his instincts, and a call from an old friend, led Jim back to Saskatchewan to join newly formed band Hypno-Go-Go. The four-piece went on to join Winnipeg-based agency roster (where they later relocated), and perform hundreds of shows across Western Canada.

“When you perform as much as we did, like anything else, you become very good at what you do. One things we were doing that was unique at this time was testing original music on our fanbase. The look of the band, the talent, and most importantly, well-written, well-delivered original material gave us a very marketable package.”

Galloway and bandmates caught the attention of Chart Toppers, a Toronto management company, leading to a new name - White Heat - a three year recording adventure with CBS Records in New York City, and multiple sessions with MetalWorks studio in Mississauga. The band’s album “We Never Heard of You Either” went on to sell more than 130,000 units and is still used in commercials and receiving airplay.

Throughout his career, Jim has recorded, written, and produced music with several rock and roll heavyweights such as Gil Moore of Triumph, Steve Webster of Billy Idol, Peter Fredette of Kim Mitchell and Jocelyn Brown of Steve Winwood.

After retreating to start a family and build a successful independent business in Oxbow SK, Galloway has revisited his career in music as an independent artist, recording and mixing his solo debut album “These Are The Good Times” (October 2014) in his home studio, as well as playing with jazz trio 2 Sharps and a Flat and is the frontman for Jimmy G And The Cable Guys. He plans on touring this summer, including festival dates at the Cathedral Village Arts Festival and All Folk’d Up.

For more, visit Jim at www.reverbnation.com/jimgalloway2.