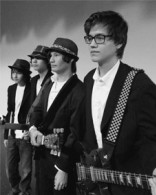 What began as a bonding practice between a father and his sons has now advanced into a dedicated and passionate young band of brothers known as Constant Reminder. This group of young gents from Kinistino SK, began playing music with their father (and now manager) Luther Constant nearly nine years ago. When Luther had to be away from home for extended periods of time for work, he was constantly reminded of his boys, and chose music as a way to make the most of their time together.

“Right away, I could see what they had,” he recalls. “They were picking up the music so easily, just learning by ear. These young men literally cannot walk past a guitar without picking it up to play. Music is their passion.”

The four brothers each pursued a different instrument and contribute something unique to the band. Seth (19, lead guitar), Cole (17, guitar and lead vocals), Rene (13, drums) and Ethan (16, bass), have released three full albums, and are currently preparing to release their fourth. They approach original songwriting as a team, with a broad spectrum of creative influences like The Rolling Stones, The Beatles, U2, John Lee Hooker, Charlie Pride, Johnny Cash, and Elvis.

Although their music career may still be young, Constant Reminder has had a number of great achievements as a group and as individuals. Drummer Rene made history when he was nominated for a Saskatchewan Country Music Association “All Star Drummer” award when he was just 11 years old. The boys have played Telemiracle, became the first band to inaugurate the E.A. Rawlinson Centre for the Arts “Spotlight on Talent” program in Prince Albert, and performed in front of multiple crowds on festival stages across the province, including an opening slot for Big Sugar last year. Most recently, Constant Reminder made the cover of the 10th Anniversary Edition of Rezx Magazine, which included a full feature about the band.

Aside from their passion for music, the Constant brothers also believe very strongly in encouraging youth and supporting communities. They have done some school presentations on positive lifestyles, and the importance and benefits of working hard to achieve goals. They are also pleased to offer their musical talents to local fundraisers.

For more on Constant Reminder, visit them online at
www.constantreminder.ca.