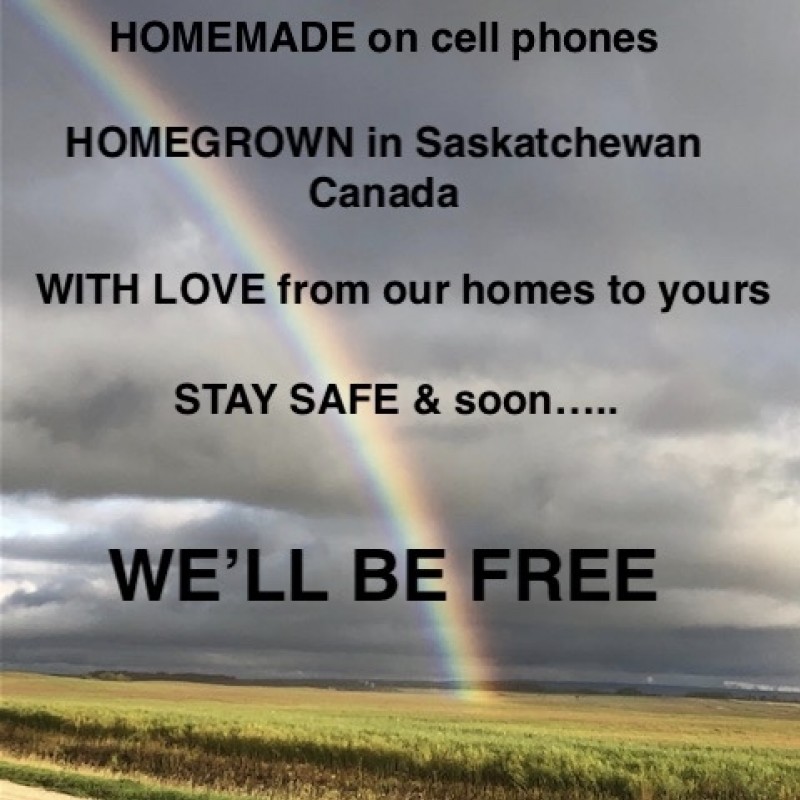 Saskatchewan artists join together to create an anthem 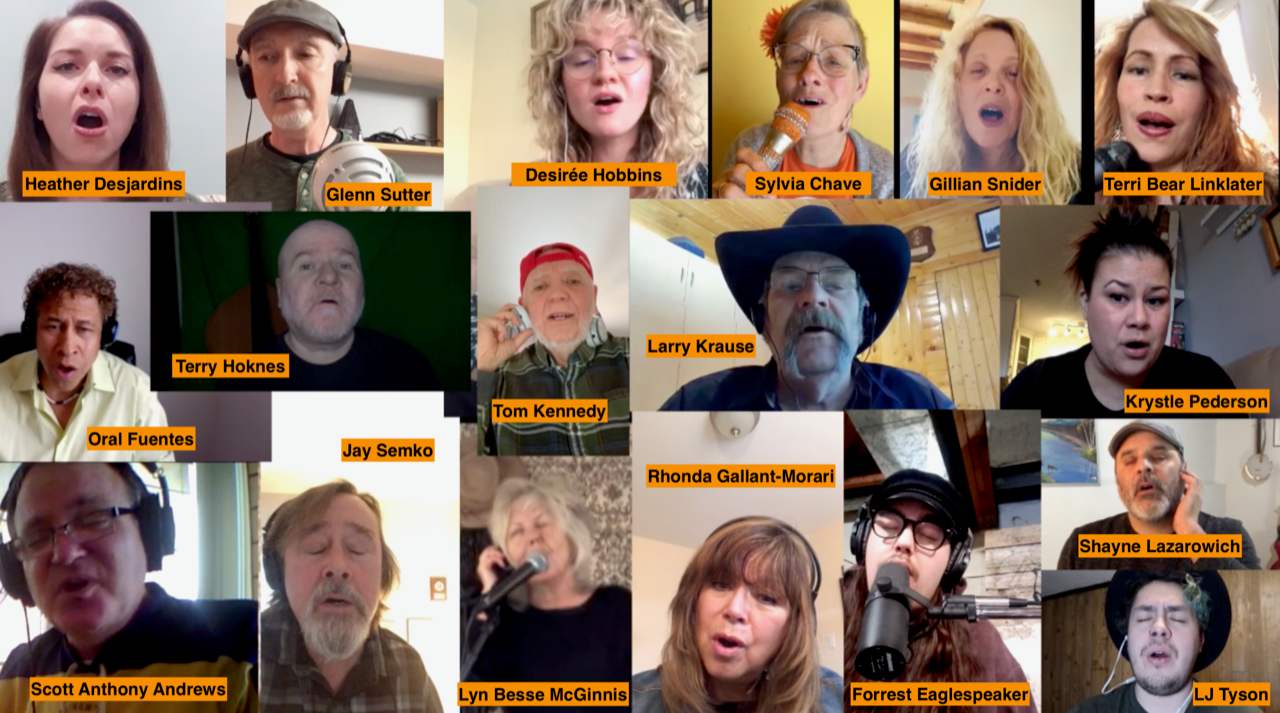 Feeling the isolation of living through the COVID-19 Global Pandemic and seeing the effects around the world, Lyn wrote lyrics about getting through these times and coming out on the other side.

Terry and Lyn then invited some musical friends to participate in the project. Everyone picked one line from the song; then recorded their line and the chorus, from the safety of their own homes, and sent their videos to Terry.  Lyn directed traffic, reviewed audio/video takes - note by note and frame by frame and took to calling herself Quincy Jones! Terry spent more than 30 hours glued to his computer and completed an audio recording and a video. Here’s Terry’s screen:

The video was released on Facebook via YouTube on April 21, 2020.  They asked FB viewers to please make a donation to the Food Banks of Saskatchewan. Watch the video: https://youtu.be/pEKFfRGC0CY

With their contribution of time and talent, together they made WE’LL BE FREE a very special musical message of love from Saskatchewan to the World!

Please check out all the artist bios below, and support Saskatchewan music!

JAY SEMKO is known internationally as singer/ bassist with multiple JUNO Award nominations and Western Canadian Music Hall of Fame members The Northern Pikes, and as an award winning music composer for numerous film and TV productions, including the syndicated series, "Due South".  Considered one of Canada’s premiere singer/ songwriters, he has released 10 solo albums.  In June 2018, The Northern Pikes were presented with the SOCAN Classic Award for their single “She Ain’t Pretty” receiving over 100,000 plays on Canadian radio. Jay continues to tour across Canada with the Northern Pikes and as a solo acoustic artist, sharing his songs, stories and adventures from his life in music, as well as his personal journey.

With guitar in hand and surprises up her sleeves, SYLVIA CHAVE has been entertaining the young and young at heart for close to 30 years. She has a knack for keeping little ones on their feet and dancing to the beat, which is always sure to please the throngs of mama and papa-razzi attending her interactive stage shows.  Sylvia’s original music has been described as the perfect soundtrack for a child’s day. Her first collaborative CD and subsequent pair of solo albums each received numerous award nominations. Sylvia’s third solo album release will be September 15, 2020.

DESIREE HOBBINS is a singer/songwriter from Regina who recently finished her undergraduate degree in Biology. Besides having a passion for the natural world, Desirée has always had a love for music and the arts. Growing up in a houseful where music was always a focus, it was easy for her to find an outlet through singing and guitar. She draws inspiration through her everyday experiences and feelings, creating soulful and melodic ballads. She is thankful and excited to be a part of such a positive project in these strange times and hopes it helps to bring a smile to people’s day!

Regina folk-rocker GLENN SUTTER (sue-ter) is a familiar part of the Saskatchewan music scene. With 5 albums to his credit, he is known for honest, intelligent songs about nature, love, and the human condition. He hit the national stage in 2010 when a track from his 2008 debut CD All You Need became the Saskatchewan song on David Suzuki's Playlist for the Planet (CBC Radio3). His latest album, co-produced with Orion Paradis and released in 2019, is a collection of nature-inspired gems called In Rivertime.

HEATHER 'H-bomb' DESJARDINS is a vocalist who's been in the Saskatoon music scene for 13 years. She is the frontperson for powerhouse rock cover band Chrome Empire. When this COVID crap ends, she’ll be making her debut performance with party band Stuck in the 80's. Her future dream is to run off the front of a stage and crowd surf during a show. She also likes piña coladas but doesn't like getting caught in the rain. She wants everyone to be kind, stay woke and avoid online shopping.

SHAYNE LAZAROWICH - His voice is one of raw intensity and power and he performs with the passion of folk and country heroes of legend.  Performances are filled with honesty and heart. Shayne Lazarowich and The Untamed bring an elegant mix of twang, harmony, and grace, through strings, percussion and gorgeous vocals.

After years of university, GILLIAN SNIDER found herself with an MA in philosophy, and a yearning to write songs, sing jazz and play the accordion. Since then, she has continued to perform, record, tour and write with musicians she loves, fronting her own projects The Whiskey Jerks and ‘Gillian Sings Joni’ and collaborating in many others, including Snider and Stanwyck and The Ray Elliott Band.

SCOTT ANTHONY ANDREWS is a Prairie-Maritime singer/songwriter - land and sea. His latest CD, Young Man on Scarth Street Playin’ Saxophone, was recorded at Nebulus Entertainment Studios in Moose Jaw, SK and produced by Jared Robinson. It was named in the Top 100 of 2019 for CIOE-97.5FM in Halifax (at #90)! He is the co-coordinator of the Regina Chapter of the Songwriters Association of Canada (SAC) and a member of the Halifax SAC. So pleased to be part of such a wonderful project, proving physical and social distance cannot usurp the power of music to bring us together. We’ll Be Free, indeed!

TWA (TOM) KENNEDY is a multi-instrumentalist (guitar, bass, mandolin) and has played in a number of rock, country, and roots bands on the Prairies. Never really recovering from the British Invasion, he continues to play and record a variety of music in a trio, in various groups, and, occasionally, on his own. HIs first full length solo album called Eclecticism is digitally available at Apple Music, etc. and his CD directly from him.

RHONDA GALLANT-MORARI is a Saskatoon-based singer songwriter.  Her first album, Dance Against The Wind, was released in 2014.  Her newest EP titled Star Drift,  will be released this summer. Whether travelling in the world or having a melancholy day, her warm voice and evocative lyrics resonate each time to comfort and soothe.  Her piano accompaniment and effortlessly graceful voice, brings us back and grounds us to uncover the strength and beauty ever present in the prairie skyline. Rhonda’s music is home.

ORAL FUENTES’ musical experience started in his home country of Belize with a multicultural band, 'Caribbean Jam', playing for local and countrywide events. Oral writes and performs original music - a mixture of Reggae with an Afro/Latin Fusion.  Oral and his multicultural band are based out of Saskatoon and have played numerous cultural shows and festivals including the SK Jazz Festival, Calgary Reggae Festival, Ness Creek Music Festival, Regina Folk Festival and JunoFest. They have shared the stage with Maceo Parker (James Brown Band), Divine Brown, Ivana Santilli, Toronto’s Jason Wilson, the African Guitar Summit, and Atlanta Georgia Rap icons ~Arrested Development - to name a few.

Over the years, performances have found LARRY KRAUSE across Western Canada, as well as the East Coast, playing his traditional, roots style of Western Roots Music. Repeat invitations to be a Feature Artist at major Cowboy Poetry Gatherings across Western Canada, Jamborees, Community Hall Concerts, the Calgary Stampede, and performances around the open fire at the end of a Cowboy day, speak very well of the following his prairie based original music has developed. He continues to tour extensively, bringing his Western Heritage performances to communities across Western Canada. Discography includes two Western music albums, a compilation DVD of songs he performed on his SHAW TV show, The Timberline Music Show, together with his band, 'Timberline', and two Country Gospel albums.

TERRI BEAR-LINKLATER hails from Muskoday First Nation and has been involved in the Saskatoon music scene for 15 years. A closet guitar player for years,  she took a Songwriting Class at the U of S, facilitated by Kim Fontaine, Jay Semko and David j Taylor. She fronted her own band for 4 years, then performed  as a duo with her son, Malik Olsen for 5 years. She then joined Jezebel (an all girl band) and they have been performing gigs for the last 5 years. In Nov 2019 she joined her 2nd band, Afterglow, with Melissa Kathleen.  Afterglow just released a song and a video was released in March 2020

Award winning TERRY HOKNES has been a staple of the Saskatoon music scene for over three decades as a musician, multi-instrumentalist (guitar/piano/ bass/ cello/ violin/ double bass/ drums/ ukulele), music chart analyst, performer, producer and music teacher.  Terry has performed in various groups from orchestras to rock bands and performed hundreds of shows as a Paul McCartney, Elton John and Roy Orbison impersonator.  He has shared the stage with musicians including The Sheepdogs, Jordan Cook, One Bad Son, Donny Parenteau and Bobby Curtola. Terry owns and operates Saskatoon Music Recording Studio.

LYN BESSE McGINNIS is a Saskatchewan singer/songwriter with a guitar and a suitcase full of original songs. Think love child of Gordon Lightfoot and Buffy Sainte-Marie! From kitchen party sing-alongs to soulful ballads, Lyn’s melodies are wrapped around a good story and served up with distinctive vocals with a little sass on the side. Lyn released her 3rd full length album A Simple Life in 2019 which follows single song The cardinal in the window (2007) to raise money for cancer research, her debut album All Over the Map (2009), Next Time Around (2012) and single song The Veil of Tamar (2014).