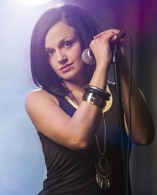 The Finals show of Big Dog 92-7/Bell Media's "The Next Big Thing" country talent competition was held last night at Eldorado Country Rock Bar in Regina, with Amy Nelson (Regina), Blake Berglund (Kennedy), and Tenille Arts (Weyburn) each performing in the hopes of convincing an esteemed panel of judges that they should be selected as this year's winner. Following impressive performances by the three artists, Amy Nelson was declared the winner.

Amy Nelson: Confident country-rock songstress Amy Nelson is a force to be reckoned with and is often referred to as one of the hardest working independent artists in the Canadian country music scene. She released her debut album in 2008 and has been nominated for 18 SCMA awards, opened for many Canadian stars (George Canyon, Terri Clark, Aaron Pritchett, etc.) and performed at notable events including the Craven Country Jamboree, Calgary Stampede and many more. This spring she was chosen as the Saskatchewan finalist in the national competition, RadioStar National Talent Search. Amyâs sophomore album, released June 20, 2014, was produced by award-winning Saskatchewan producer Bart McKay. Her summer is busy with numerous upcoming performances, and in September she will be heading out on a radio tour of western Canada to promote her upcoming single.

The Next Big Thing started out with submissions from artists all across Saskatchewan, from which a music industry jury selected the Top 10 semi-finalists. The Top 3 artists were then selected to perform in the live finals, presenting an original music set that was evaluated on criteria including vocal ability, songwriting, overall performance/stage presence, originality, market potential, and audience response.

Nelson receives a custom-tailored prize package worth over $15,000, including $10,000 cash, and will be performing Saturday, July 12 on the main stage at the Craven Country Jamboree. She will next meet with SaskMusic to decide upon a plan of action for investing the prize into her career and taking advantage of additional opportunities that may arise as reigning champion. It is hoped that the prize will have a true and lasting impact on her career.

We are pleased to note past Next Big Thing winners Chris Henderson and Jess Moskaluke are also performing this year at the Craven Country Jamboree, on Friday, July 11.

Big Dog 92-7/Bell Media and SaskMusic express their praise for the quality of artists who submitted this year and are proud of the talent coming from Saskatchewan. Congratulations as well to the seven semi-finalists who rounded out this yearâs Top 10: Kelsey Fitch (Parkside), Mandy Ringdal (Outlook), Scott Richmond (Regina), Stephen Maguire (Saskatoon), Steve Gibson (Theodore), The Dead South (Regina) and Val Halla (Regina). Thank you to our venue sponsor, Eldorado Country Rock Bar.