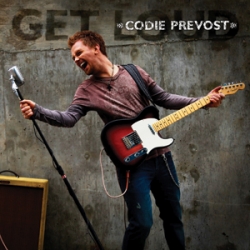 “Building on the momentum from his first two albums “The Road Ahead” (2005) and “Spin 6-PAK Vol. I” (2008), both which have been honored with accolades, Codie Prevost has now released his highly-anticipated third album, “GET LOUD”. An exciting change for Prevost this time around was having the opportunity to work with one of Canada’s top producers, Tom McKillip, who captured his unique style and sound. McKillip says “Codie has all the ingredients to be the next Canadian country music star”. Prevost has released two CMT singles/videos “Rolling Back To You” & “Standing Still” from “GET LOUD” which features 12 songs including the bonus track “Cotton Eye Joe” and guest appearances by One More Girl and Katie Love Hess.”