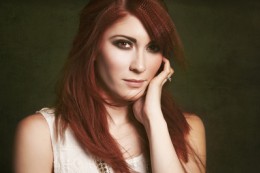 Quirky, small-town country girl Kelsey Fitch was born into a natural, musically nurturing environment, so it’s no surprise that she’s been singing since the age of 5. With a musically inclined mother encouraging her from a young age, Kelsey learned to appreciate many different types of music in her youth, from classic rock and country, to classical music and hymns.

“I grew up playing piano and songwriting, but it wasn’t until about five years ago that I decided this is absolutely my passion, my therapy, and what I want to pursue as a career,” notes Fitch.

Fitch has learned to apply her rural spirit to her music, drawing inspiration from the people around her, as well as her own rustic experiences. “Most of the time I come up with songs when I’m driving; I just get a melody in my head and go with it.”

Although Kelsey has been refining her musical talents for many years, she’s fairly new to the commercial music industry in Saskatchewan. However, she has been making her time count, and has received a number of accolades.

“I have been very grateful to have received positive attention and opportunities in the last couple of years. I have received nominations for Rising Star and Female Vocalist at the Saskatchewan Country Music Association Awards; performed during the Canadian Country Music Awards; made the Top Ten in Big Dog 92.7/Sask Music’s Next Big Thing; and this year, released my debut single and music video for “A Little Taste” to Canadian country radio which is doing really well! I feel very blessed to have such amazing support.”

Kelsey identifies herself as a raw, stripped-down artist with “a blended sound of classic and modern country achieved with traditional instruments like the banjo and fiddle, and fresh lyrics that are simple and honest.“

The future for Fitch holds the release of her debut EP, “Play Nice,” filling her schedule with gigs, and continually pouring herself into songwriting. “I can’t wait to see what the future holds for my music and what opportunities will arise. It’s something I hope to do for a very long time.”