Be part of the music and experience returning back to your classic rock roots! Charismatic singer Kristina has an uncanny ability to keep her audience engaged with emotional and powerful edgy vocals and non stop energy while demanding attention along with her keyboard skills and the rhythmic backbeats and harmonics delivered by her talented bandmates. Kriss The Sky covers a variety of rock/pop hits and have also released original music.

Of Croatian decent, I grew up playing music with my very talented family in Regina, Saskatchewan, Canada. I started organ lessons when I was 6 and then moved on as singer/keyboard player playing music with my family in various venues and festivals across the Canadian prairie provinces. I think my first gig was when I was about 9 years old! I was blessed to learn a variety of musical styles such as rock, pop, country, roots, R&B, jazz and classical. I also began writing music in high school with my talented brother Radoslav Johnny Gasparic, who has moved on to become a prolific recording producer/engineer/performing musician in Calgary, Alberta, Canada.

In my mid-20s, I went on to earn my Bachelor of Music Education from the University of Regina with a major in Piano and a minor in Drama and currently teach School Band to awesome kids in grades 6-8!

Formerly as Sonic Orchid, my band and I released an EP in 2005 and a full length album in 2008 and played hundreds of gigs across the Prairie provinces during our 19 years together, playing classic rock and hard rock hits.

Now, as Kriss The Sky, I’m recording my works as a solo artist as well as with my band and other talented musicians. With the union between my piano/keyboard orchestrations and my various voices, my music touches upon many levels and is touted a new multi-genre hybrid style. I hope you enjoy all I have to offer!

Kriss The Sky are: 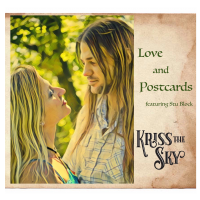